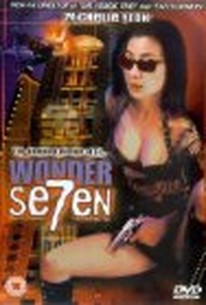 Noted choreographer Ching Siu tung spins this two-fisted action flick about Wonder Seven, a band of motorcycle-driving orphans who battle enemies of the Mainland Chinese government. After their dealings with a band of thugs, their investigation leads them to Hong Kong and a Swiss bank account filled to the rafters with diamonds. Their sworn enemies are Tsun (Chin Ho) and Ying (Michelle Yeoh), a villainous duo who agree on little. In spite of their long-sworn animosity, Ying develops a strange interest in Wonder Seven's leader, Fei (Li Ning), and even saves her life once. Meanwhile, Tsun and his henchman, who was once a Wonder Seven member, plot all sorts of nefarious schemes to get their hands on those bails upon bails of diamonds. This film was reportedly so disjointed after shooting that film was essentially rewritten on the editing table. ~ Jonathan Crow, Rovi

There are no critic reviews yet for 7 jin gong (Wonder Seven). Keep checking Rotten Tomatoes for updates!

There are no featured reviews for 7 jin gong (Wonder Seven) at this time.