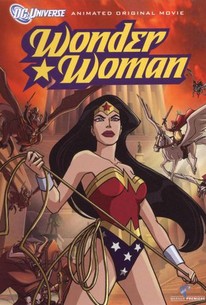 A graceful Amazon princess of untold strength and beauty attempts to prevent the god of war from instigating a conflict that will last for centuries and destroy the human race as the animated adventure marking the return of DC Comics heroine Wonder Woman. On the mystical island of Themyscira lives a fierce race of warrior Amazons who have raised a powerful daughter named Princess Diana. The Amazons live in secrecy from the outside world, but when Army fighter pilot Steve Travor crash-lands in their tropical paradise, the headstrong princess defies the law of the land by accompanying Trevor back to civilization. But her transition into the modern world won't be an easy one, because when Ares escapes from his Amazonian prison and begins plotting his revenge, Princess Diana is the only person who stands between the god of war, and the destruction of the human race - beginning with the Amazons. Now, as Princess Diana harnesses her unique powers to boldly fight back against Ares and save the planet from certain destruction, Wonder Woman is born and the battle for civilization begins.

Marg Helgenberger
as Hera
View All

I'd go so far to say that it's a fairly remarkable product for an industry that seems to be completely unable to make great female comic book characters into credible film stars.

I wanted to love Wonder Woman, but it just doesn't hold up amid modern takes on the character and the Patty Jenkins film.

This is another fantastic version of Diana's origin and is full of badass Amazons and incredible animation.

Wonder Woman may look like a sex object, but she doesn't carry herself like one, nor does the narrative treat her as such.

She was definitely the kind of girl you wanted to take home to mom, even if you might need a first aid kit the next day.

Finally, a solid film in which the Amazon's story can be told to current audiences.

A fast-paced feature sure to satisfy fans and win a generation of new ones. [Blu-ray]

Warner's line of direct-to-DVD superhero films has finally given the Amazing Amazon her due.

...a perfectly acceptable cartoon movie of its kind. If you like its kind.

This straight-to-DVD full-length animated Wonder Woman flick turns out to be unexpectedly enjoyable!

I really enjoyed my short time spent with the character and her mythos...

Wonder Woman offers a vast and epic exploration on the Amazonian Princess. With sleek animation, vision and even a hint of humor, this DC animated feature is as tremendous as its leading heroine. 4/5

Pretty decent introduction to DC's female counterpart to Superman as Aries, the god of war, plans some global thermonuclear annihilation in order to take over the reins on Mt.Olympus. More than simply a super reflection of the big guy however, Wonder Woman does boldly represent ideas of equality between the sexes, introducing the times when such introductions aren't necessary at all.

Hopefully this is at least some sort of inspiration for the impending live-action feature...Excellent!

As good as an animated origin Wonder Woman film is going to get. Honestly though, I have very little interest in the idea of a feminazi Utopian island created by Greek gods and the warrior princess who prances around on it. I just find the idea of Wonder Woman so... obnoxiously obsessed with outdated, elementary, oversimplified "gender wars", but alas, this is a pretty decent animated film. Not only does it humor and have a good script but it has character development, complexities, and relationships that actually perpetuate the story. I mean sure, it all dwindles down to a stupid smash-and-bash ending but c'mon, it's an animated super-hero film. Speaking of, the animation is absolutely astounding, some of the best stuff I've seen from the "West" (Japanese still easily step all over this, unfortunately.) which is essentially the highlight of the film. Watching Diana and her gal pals beat shit up is great. Let's just say, this particular genre's standards have been pretty low. Making this an achievement on DC's part.