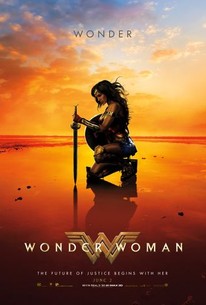 An Amazon princess (Gal Gadot) finds her idyllic life on an island occupied only by female warriors interrupted when a pilot (Chris Pine) crash-lands nearby. After rescuing him, she learns that World War I is engulfing the planet, and vows to use her superpowers to restore peace. Directed by Patty Jenkins (Monster).

Eugene Braverock
as The Chief

Peter Stark
as Soldier at Gala

87 Fearless Women Movie Heroes Who Inspire Us
Our Favorite Movies of the 2010s: Rotten Tomatoes’ Staff Picks!
The 21 Most Memorable Movie Moments of the Past 21 Years: Vote for the Best Now!

It's easily the best film in the DC Extended Universe (DCEU) thus far. But what does that mean when your yardstick is [Man of Steel, Batman vs. Superman, and Suicide Squad]?

It's not difficult to see where this route is going, but that doesn't make it any less enjoyable to watch. The simple power of love is the cornerstone upon which Wonder Woman is built. If it seems earnest, it's because it is.

As befitting the genre, Wonder Woman is heroic and spirited. The fighting sequences are spectacular, and the story is engrossing, uplifting and fun. There's even a bit of romance and humor amid all the action. [Full review in Japanese]

Gal Gadot has a talent for making every experience feel like it's her first - which, in Diana's case, it often is. She is remarkably alert. Her eyes and her face are always open; she's always receiving, learning, responding.

The Jenkins / Heinberg duo gave Hollywood a valuable lesson: the "underdogs" of indie cinema and television have much to contribute to contemporary action cinema that urgently needs new blood to avoid repeating formulas [Full review in Spanish]

Diana Prince is both compassionate, gentle, and peace-loving while at the same time strong, uncompromising where important, and unwilling to be pushed around.

Wonder Woman is the right movie at the right time -- and for all the right reasons.

It's not a stretch to say that Wonder Woman is the best of the recent DC Comics movies, but that's kind of damning with faint praise.

It showed a female-led comic book conquest was worth doing, especially when it leveraged well-executed period-piece elements with delightful sidekick chemistry...it proved everything didn't have to be dark and brooding in order to reach an audience.

Wonder is Badass thanks to Patty Jenkins and Gal Gadot. PAcked with action, adventure and the type of diverse cast I wish was prevalent in most Hollywood blackbusters!

Diana is truly the god we all don't deserve and the much-needed smashing success for the DCCU. (Is that a thing? Do people call it that?) Wonderwoman accomplishes the difficult task of creating a mythical being that's not only relatable as a coming-of-age tale but also much more relevant to humanity's plight than Thor could ever be. All this while delivering action sequences that are just as impossibly astounding! It also respectfully portrays the horrors and difficulties of a World War without reducing it down to cartoon entertainment in laser guns to appropriate the superhero genre, a decision I strongly disagreed with in Captain America. Marvel comparisons aside the film has a generally typical story with an acceptable revealing end but also has such intelligent, powerful themes plugged into it. Support characters are memorable and not wasted, playing key roles in Diana's character progression that eventually becomes pivotal in the plot as well. Ah! The titular role. Gadot does such a phenomenal job conveying a sense of naivety and maturity in simultaneous form. The fish-out-of-water humor is delivered in grace and it's refreshing to not be bombarded with one-liners and zingers to have my amusement kept. There are some visual technical hiccups (Snyder's handy work no-doubt) and Ares' final unmasking is a little improptu in delivery but to say Wonderwoman is anything less than an amazing superhero-origin movie would simply be wrong.

Completely charming, wonderous, lovingly crafted, and even progressive in the way it tackles dark, violent subject matter seriously as a backdrop to what are more traditional super heroics. Gal Gadot is an absolute revelation and Chris Pine delivers in a surprisingly satisfying and pivotal role. "Wonder Woman" pretty much has it all. It's a shining light in the crowd of an over saturated superhero-obsessed movie market. It at the very least deserves a spot in any conversation regarding the best superhero stories yet captured on film.

This film has some pros, but many cons. Gal Gadot crushes the action sequences as expected, but this film constantly plays one of three hands: One as a comedy with Gadot as a socially unaware Amazon stumbling through a new world, a second as a super hero story in which the villain is vague, not as formidable as he is built up to be, and unconvincingly portrayed by an old man who has no business fighting Gal Gadot, and a third hand as a forced romance between Gadot and Pine. While both actors perform well, the writers really let them down on the comedy, action and romance fronts. While this may be the best DCU movie I have seen, it's probably the last DCU movie I will see.