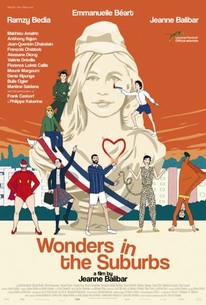 After a long separation, Joëlle and Kamel finally divorce, but both are on the staff of Emmanuelle Joly, the newly elected mayor of Montfermeil, an underprivileged town on the outskirts of Paris. The mayor's team gets to work implementing the wonders she promised on the campaign trail: naps for all; crops on rooftops; sexual assistance in the home; harmonization of humans' breathing; Montfermeil International School of Languages, and so on. But dangerous enemies resolutely sabotage these fine policies as Paris plans its expansion, and Madam Mayor slowly slips into depression. Will we have a wonderful Brioche Day this year?

Critic Reviews for Wonders in the Suburbs (Merveilles à Montfermeil)

There is charm in it, of a baffling sort.

[Wonders in the Suburbs] comes to a neat conclusion, but we're left feeling ignorant to whatever was the point in the first place.

It's nonsensical on several levels, with big subplots left undeveloped or twisting in the wind.

There are no featured reviews for Wonders in the Suburbs (Merveilles à Montfermeil) at this time.