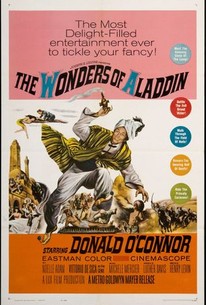 Aladdin (Donald O'Connor) is a poor young man living in ancient Bagdad, who is given to flights of imagination, and taken with tales of the wealthy and powerful -- in many ways, he's still a boy, and so caught up in his daydreaming that he doesn't realize how his one-time childhood playmate Djalma (Noelle Adam), now a grown young woman, loves him (even if her merchant father thinks he's a worthless loafer). In a moment of indulgence, his mother buys Aladdin an old lamp so that he can have light at night "like a rich man." He accidentally discovers that the lamp contains a genie (Vittorio De Sica), who will grant him three wishes -- but he is so scatterbrained, that he can't figure out exactly how he called the genie in the first place. Aladdin and Djalma both end up headed for Basra and the wedding of the young Prince Malouk (Mario Girotti) to the princess (Michele Mercier), and both are caught up in the plans of the evil Grand Vizier (Fausto Tozzi) to kill the prince and marry the princess himself. Those plans, helped by a malevolent old magician (Raymond Bussieres), include the use of two full-size magical dolls, one a dancing wonder and the other with a deadly embrace. And only Aladdin and his genie, and the brave young prince, can stand in his way.

The plot is just a string of episodes designed to display the maximum amount of female flesh and to show off the aforementioned special effects...

Uncommon for a lighthearted fantasy, the film features an abundance of only somewhat restrained sexuality.

There are no featured reviews for Le meraviglie di Aladino (The Wonders of Aladdin) at this time.