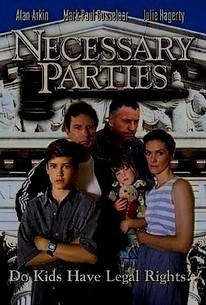 Teenaged Chris Mills (Mark Paul Gosselaar) is aware that his argumentative parents (Julie Hagerty and Geoff Pierson) are about to divorce. He also catches on that he and younger sister Jenny (Taylor Fry) are going to be pawns in a bitter custody battle. To avoid this, Chris takes legal action to prevent his parents from splitting up. He hires a licensed but unsuccessful attorney (Alan Arkin, who collaborated on the script with his wife Barbara) to press his case. Chris succeeds in delaying the divorce--now he needs a legal precedent to halt it altogether. Necessary Parties was originally presented as the two-part opener for the 5th season of PBS' Wonderworks; the film debuted on November 5 and 12, 1988.

Anthony Arkin
as Joey
View All

There are no critic reviews yet for Necessary Parties. Keep checking Rotten Tomatoes for updates!

There are no featured reviews for Necessary Parties at this time.