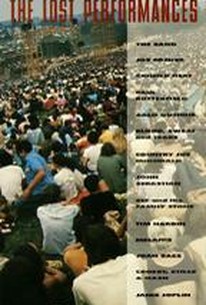 Woodstock: The Lost Performances is a video collection of highlights from the 120 miles of footage used to make the original 1970 film. Included here are "Work Me Lord" by Janis Joplin, "We Shall Overcome" by Joan Baez, and "Let's Go Get Stoned" by Joe Cocker. This compilation also contains performance footage from Arlo Guthrie, Country Joe McDonald, and the Band. The video was compiled and released during the 20th anniversary of Woodstock.

Joan Baez
as Herself

Arlo Guthrie
as Himself

Joe Cocker
as Himself

Richie Havens
as Himself

David Crosby
as Himself

There are no critic reviews yet for Woodstock: Lost Performances. Keep checking Rotten Tomatoes for updates!

There are no featured reviews for Woodstock: Lost Performances at this time.