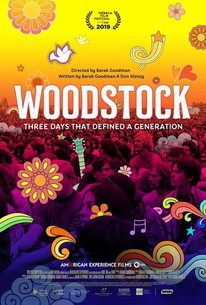 Critics Consensus: Woodstock: Three Days That Defined a Generation lives up to its title with an entertaining contextualization of the titular festival and its cultural impact.

Critics Consensus: Woodstock: Three Days That Defined a Generation lives up to its title with an entertaining contextualization of the titular festival and its cultural impact.

Critic Consensus: Woodstock: Three Days That Defined a Generation lives up to its title with an entertaining contextualization of the titular festival and its cultural impact.

In August 1969 -- against a backdrop of a nation in conflict over sexual politics, civil rights, and the Vietnam War -- half a million people converged on a small dairy farm in upstate New York to hear the concert of a lifetime. What they experienced was a moment that would spark a cultural revolution, changing many of them and the country forever. With never-before-seen footage, WOODSTOCK: THREE DAYS THAT DEFINED A GENERATION tells the story of the political and social upheaval leading up to those three historic days, as well as the extraordinary events of the concert itself, when near disaster put the ideals of the counterculture to the test. What took place in that teaming mass of humanity -- the rain-soaked, starving, tripping, half-a-million strong throng of young people -- was nothing less than a miracle of unity, a manifestation of the "peace and love" the festival had touted, and a validation of the counterculture's promise to the world. Who were these kids? What experiences and stories did they carry with them to Bethel, New York that weekend, and how were they changed by their time in the muck and mire of Max Yasgur's farm? Directed by award-winning filmmaker Barak Goodman and written by Goodman and Don Kleszy, WOODSTOCK takes us back to the three days that defined a generation.

News & Interviews for Woodstock: Three Days That Defined a Generation

Disney’s Aladdin One Jump Ahead of The Fresh Line, For Now

View All Woodstock: Three Days That Defined a Generation News

Critic Reviews for Woodstock: Three Days That Defined a Generation

There is so much great footage, it could have been done just the other week, because everyone looks exactly the same. Every festival today has some sort of debt to Woodstock in some way.

It does bring a freshness to a story that we've heard a million times.

Some optimism is required to allow for the possibility that the chaos of Woodstock offered a template for anything, but, if you inhale deeply, the film just about achieves this microcosmic ambition.

This film offers a moving remembrance of the people, music, and extraordinary circumstances that aligned to produce a cultural touchstone.

Goodman never lets the music breathe, even slapping narration over Hendrix's masterful version of the national anthem, one of the great political statements in rock history.

Uses the perspective of nearly 50 years' hindsight to demonstrate anew how the festival was both a mess and a miracle, and implicitly argues that it was a good deal more miracle than mess.

Whereas the original Woodstock movie was essentially a concert film, this PBS Woodstock documentary attempts to fill in a lot of the behind-the-scenes blanks, much like bonus commentary does on a home-video release.

If you enjoy this Woodstock doc as much as I did, you may want to check into the growing library of concert memorabilia, including the three-hour-plus concert film and record album.

The promotors lost their shirt but oh, what they created. Fascinating stuff.

Woodstock has a complicated legacy and a lot of myths surrounding it, but Woodstock: Three Days That Defined A Generation decided to go with the story that most of us know by heart. But it's still an entertaining watch, if not overly informative.

Arrogantly infuriating... Baby Boomers didn't change the world at Woodstock, or create a New Man... It's sad that, 50 years later, they still can't tell the difference.

Over-familiar, but still revelatory, amusing and at times -- quite moving.

There are no featured reviews for Woodstock: Three Days That Defined a Generation at this time.