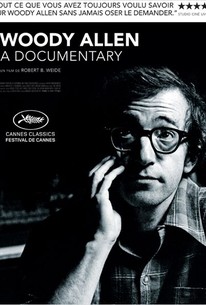 Critics Consensus: Driving aside the most polemical aspects of the director's biography, Woody Allen: A Documentary draws an interesting picture of the filmmaker's opus while allowing some glimpses of his intense personal life.

Critics Consensus: Driving aside the most polemical aspects of the director's biography, Woody Allen: A Documentary draws an interesting picture of the filmmaker's opus while allowing some glimpses of his intense personal life.

Critic Consensus: Driving aside the most polemical aspects of the director's biography, Woody Allen: A Documentary draws an interesting picture of the filmmaker's opus while allowing some glimpses of his intense personal life.

Robert B. Weide
View All

This documentary is a pleasure, though we don't get too far beneath the surface.

There is more to Woody Allen: A Documentary than its modest title suggests, although perhaps not quite enough to justify swapping that "a" for "the".

I could have watched this armada forever. The clips alone, from Sleeper, Annie Hall, Zelig and others, pageant his greatness.

It's a collaborative effort with Woody (who, unusually, looks happy to be interviewed), so we see him at home (showing off a typewriter he bought for $40 at 16), writing on his bed and standing outside his childhood home in Brooklyn.

The whole thing would be a bit of a hagiography but for Woody's own comments.

Why do we love? Why do we die? Weide's biography talks about the filmmakers's life neither as iconic nor a piece of scandalous tabloid fodder, but as a quest to explore our most basic human concerns.

There's nothing innovative or particularly interesting about the film's structure; it is a chronological timeline of Allen's work and doesn't contain much of what may be regarded as new information to the director's fans.

For fans it's a smorgasbord of fun stuff, ranging from clips of movies you may not have seen for a while, to footage of Woody at work.

The story of Woody Allen, however, is ripe for a 'ripped from the headlines!' movie, which is why it's so nice to see rather a respectful, unsensationalised documentary on him.

For film lovers with a general awareness of Allen's work, this is a richly-rewarding, insightful documentary which can only make more of them want to become super fans.

An enjoyable biography that is also, quite unfortunately, too safe to be memorable, and it doesn't help that the second part skips many of Allen's films to focus on his "best moments" after 1980, preventing this from being an essential documentary about him.

Watching PBS' documentary on Woody Allen is like spending an afternoon with an old friend. It's enormously entertaining, but despite a running time of over three hours and the full participation of Woody Allen and almost all of his notable, still-living associates, it feels less like an in-depth examination of Allen's life than a light-hearted overview of it. In its admirable but foolhardy attempt to cover every facet of Allen's life and career, it's forced to gloss over a lot of topics and speed through decades in minutes. The fact remains, though, that Woody Allen: A Documentary is enthralling, hilarious, and guaranteed to evoke powerful nostalgia from all Woody Allen fans. This movie's closest parallel is probably Wild Man Blues, another documentary for which Allen opened himself up. Wild Man Blues captured Allen naturally, which made it loose and intimate, but Woody Allen: A Documentary consists entirely of staged interviews and archive footage, which gives it a more official feel. And while Wild Man Blues was micro - looking at Allen over the course of a month - Woody Allen: A Documentary is macro - starting with Allen's birth, and going all the way up to the success of Midnight in Paris. So vast is its focus that there were obviously a lot of decisions that needed to be made about what to keep and what to cut. I have some quibbles with what they've chosen to include and exclude, and just about everyone else will too. In trying to do so much, they've prevented themselves from being able to wholly satisfy anyone, other than the curious non-fan looking for a quick overview of what Woody Allen is all about. Woody Allen: A Documentary was written, produced and directed for PBS' American Masters series by Robert B. Weide. Weide, a career chronicler of funny people, has directed documentaries on the Marx brothers, Mort Sahl, W.C. Fields and Lenny Bruce. He's also executive-produced the entire run of Larry David's Curb Your Enthusiasm and directed half of its episodes. Weide's most relevant work with regard to Woody Allen: A Documentary is Marx Brothers in a Nutshell, a 1982 documentary he made for PBS. His first project out of film school, it was produced by Allen's long-time agent/producer Charles H. Joffe, and, likely as a result of this, managed to land Woody Allen as a talking-head contributor. This led to Weide allegedly spending years trying to convince Allen to participate in another documentary, this time with himself as the subject. Allen was quite reclusive in the '80s and '90s but started to open up and make more public appearances in the '00s, so it makes sense that he'd finally agree to this project in 2010. Filmed over 18 months, Woody Allen: A Documentary boasts "unprecedented access" to Allen, although he's no more revealing, candid or emotional than he's been in any of his press junkets of the last decade. He says a lot of the same things we've been hearing him say forever, although he's charming and hilarious as always. He also offers many seemingly mundane tidbits that are likely to thrill Woody Allen obsessives - like a tour of his childhood neighborhood, and a look at the typewriter on which he's typed up every single one of his movies. Weide is clearly a Woody Allen fan, and this movie was made for other fans. The tone is loving, verging on worshipful. None of the many criticisms leveled against Allen over the decades are addressed (outside of a brief acknowledgement from Leonard Maltin and Mariel Hemingway that he's made 'some clunkers'). Weide doesn't invite anyone with any remotely harsh things to say about Allen, and doesn't ask any tough questions. If he had levelled those tough questions, it's unlikely he would've gotten any answers from Allen, but it might have been nice of him to try. All in all though, it's an interesting journey through the life of one of cinema's greatest voices.

It sidesteps the far more interesting inner-depths of Allen's mind (and history), but as a look at his writing process and filmography, this documentary is fascinating, insightful, and satisfying.

"Woody Allen: A Documentary" is no great work of art, but it's a very thorough overview of Allen's life and work. Mr. Allen allows himself to be filmed quite a bit and gives thoughtful commentary on a range of subjects. Ultimately, it makes Allen out to seem like a rather shallow craftsman, not a true artist. Not sure that was the intention of the project! I feel that Allen had a brief period of true artistry in the late 1970s. In my view, his last great work of art was "Stardust Memories," which I'm confident will someday be perceived as the masterpiece it is.