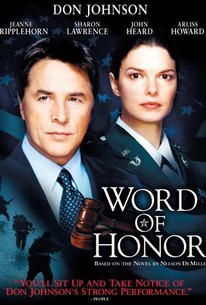 A man is called by the military to defend himself against long-ago charges of criminal misconduct in this made-for-cable drama based on a novel by Nelson DeMille. Ben Tyson (Don Johnson) has done well for himself 30 years after his tour of duty in Vietnam -- he's a successful businessman and happily married to a beautiful woman, Marcy (Sharon Lawrence). But Tyson's contented life is shattered when a book is published accusing him of being responsible for a bloody ambush in a field hospital that took the lives of a number of Vietnamese civilians. Tyson is recalled to duty by the army to answer these charges in a court martial. As his professional and personal lives begin to buckle under the strain, Tyson must defend his actions, as well as his responsibilities to his comrades and himself, to prosecutor Major Karen Harper (Jeanne Tripplehorn). Don Johnson's son, Jesse Johnson, plays the young Ben Tyson in Vietnam flashback sequences.

William B. Davis
as Lewis Kaplan

Critic Reviews for Word of Honor

There are no critic reviews yet for Word of Honor. Keep checking Rotten Tomatoes for updates!

Audience Reviews for Word of Honor

There are no featured audience reviews yet. Click the link below to see what others say about Word of Honor!