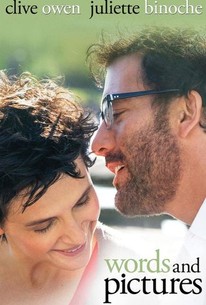 Critics Consensus: While both talented performers in their own right, Juliette Binoche and Clive Owen are decidedly mismatched in Words and Pictures, and they aren't done many favors by the movie's awkwardly constructed screenplay.

Critics Consensus: While both talented performers in their own right, Juliette Binoche and Clive Owen are decidedly mismatched in Words and Pictures, and they aren't done many favors by the movie's awkwardly constructed screenplay.

Critic Consensus: While both talented performers in their own right, Juliette Binoche and Clive Owen are decidedly mismatched in Words and Pictures, and they aren't done many favors by the movie's awkwardly constructed screenplay.

A witty romantic drama, WORDS & PICTURES stars the engaging duo of Juliette Binoche and Clive Owen working together on-screen for the first time. Prep school English teacher Jack Marcus (OWEN) laments his students' obsession with social media and good grades rather than engaging with the power of the written word. A one-time literary star, Jack has not published in years filling his spare time with drink versus the art of language. He meets his match in Dina Delsanto (BINOCHE) - an abstract painter and new teacher on campus, who was once celebrated for her art. From the start, the two flirt and provoke each other with equal relish. (C) Roadside

Navid Negahban
as Will Rashid

Bernadette Beck
as Girl in Hallway

Wesley MacInnes
as Boy in Hallway

Critic Reviews for Words And Pictures

The performances are first-rate.

It's old-fashioned, but no less stirring for that - especially as Schepisi has spent a lifetime practising what he preaches.

Binoche's big throaty laugh is heard to appealing effect and Owen's performance has more depth to it than anything I've seen from him before.

Barely qualifies as a motion picture.

A romantic comedy about a match neither written nor pictured in heaven.

'Words and Pictures' leans heavily on the considerable appeal of its stars and the touch of its director, Fred Schepisi, who maintains a light hand throughout

It is therefore unfortunate that when the film is not immediately dealing with the uplifting qualities of art, it is drowned in clichés

Words and Pictures is too timid and half-hearted to even make an entertaining train wreck.

Watching Owen and Binoche do this dance leaves one emotionally breathless and wanting more. They are like fire and ice as each brings amazing nuance to their individual and collective performances.

While it's not as sharply observed as one wishes it could have been, the film manages to be worthwhile for the excellent Juliette Binoche and Clive Owen.

Words and Pictures is an ambitious romancer but its missed opportunities leave this charming but trivial tale of artistic rivaling viewpoints not quite making the grade.

The sparring between these two actors and the maturity of their relationship makes it worth watching despite the inevitability of the story.

Audience Reviews for Words And Pictures

Very different American romantic drama directed by 74-year old Aussie director Fred Schepisi brings a very odd mixture of characters. It brings the vast experience of a winning director, a mature view of life and immature approach and reactions to events from that life in the story, excellent acting, and it almost seems like a tribute for a profession which started all other professions - teaching! I am glad that was screened in the Gala Presentation section at the 2013 Toronto International Film Festival, but this is not Schepisi's best work - far from it! The story background is happening at Croyden, a wealthy prep school in Maine that hires teachers for their advanced courses who are accomplished professionals. Jack Marcus is supposedly one of those - a writer and poet who teach the advanced writing class. He loves who he does, he is good in it, challenging and inspiring his students. Describing how good writing creates an image, like Haiku or John Updyke's descriptions, his students understand the significance of the words. But, despite being a published author, he hasn't written or published anything for years, and gets a writer's block when he tries to write. The school literary magazine, which is his pride and joy, is going to be axed for budgetary reasons, and this alcoholic, who arrives late to work and is on the verge of being fired, decides to fight. It is not easy fighting back when school hears that he has been banned from the local restaurant because of his drunken behaviour and his adult son from his marriage becomes estranged because of Jack's drinking and irresponsibility... Jack still does it, with a very unlikely partner! I think that we would all have difficulty finding a romantic drama these days with such less sympathetic characters as Jack Marcus (Clive Owen) and Dina Delsanto (Juliette Binoche). Old fashioned directing felt very comfortable but the odd thing here was the screenplay. At the end felt like few life moments put together for some eulogy not a carefully edited artistic creation - mainly because of the very unconventionally structured screenplay. It seems that t the end I enjoyed it, but my thoughts are that this could be an outstanding film if the screenplay was different.