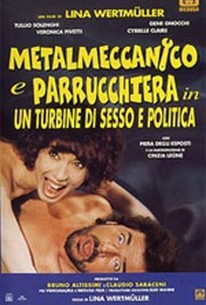 This Italian political satire from filmmaker Lina Wertmuller will be most enjoyable for those well-grounded in Italian politics. Covering the late March through April general elections of 1994 in which right-wing conservatives routed the incumbent leftists. This is particularly upsetting for Tunin, a mechanic with a firm belief in communism. Fearing that his party is about to lose, he journeys to a northern village to stir up trouble. He isn't there long before he is arguing with a beautiful hairdresser. Their debate is fiery as is his growing and impossible-to-disguise passion for her. She too is intrigued with him, but their disparate ideologies threaten to keep them apart. ~ Sandra Brennan, Rovi

There are no critic reviews yet for Metalmeccanico e parrucchiera in un turbine di sesso e di politica (The Worker and the Hairdresser). Keep checking Rotten Tomatoes for updates!

There are no featured reviews for Metalmeccanico e parrucchiera in un turbine di sesso e di politica (The Worker and the Hairdresser) at this time.