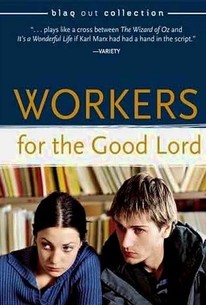 Workers for the Good Lord Photos

Dubbed The Wizard of Oz meets Karl Marx's version of It's a Wonderful Life, this film, directed by Jean-Claude Brisseau, is a wild, ludicrous comedy about an ill kind-hearted mechanic who becomes a bank robber. Young couple Fred (Stanislas Merhar) and Elodie (Coralie Revel) live in a low-rent tenement with their infant child. Fred is generous to a fault; he gives his money away to the point of endangering his family's finances. The final straw for the beautiful Elodie comes when Fred gets fired for head-butting his boss -- she dumps him. Lovelorn and crestfallen, Fred rashly robs a post office in order to help an aging beggar. He escapes with a stolen car and comely postal clerk Sandrine (Raphaele Godin), who has long had a crush on him. Together the two spread the booty Robin Hood-style to their fellow downtrodden. While hiding out in a school, they encounter Maquette (Emile Abossolo M'Bo), a supposed African prince who has been turned into a penniless exile thanks to his enemies. Later the three head south. While Fred knocks over the occasional liquor store, Sandrine patiently teaches her new beau to read. ~ Jonathan Crow, Rovi

Critic Reviews for Workers for the Good Lord

There are no featured reviews for Workers for the Good Lord at this time.

Workers for the Good Lord Quotes