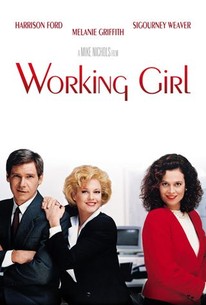 Critics Consensus: A buoyant corporate Cinderella story, Working Girl has the right cast, right story, and right director to make it all come together.

Critics Consensus: A buoyant corporate Cinderella story, Working Girl has the right cast, right story, and right director to make it all come together.

Critic Consensus: A buoyant corporate Cinderella story, Working Girl has the right cast, right story, and right director to make it all come together.

Unhappy with her job and her loser boyfriend, Melanie Griffith takes a secretarial post at a major Wall Street firm. Her boss is Sigourney Weaver, an outwardly affable yuppie whose grinning visage hides a wicked and larcenous propensity for exploiting the ideas of her employees. While Weaver is incapacitated, Griffith is compelled by circumstances to pose as her boss. Her inborn business acumen and common sense enable Griffith to rise to the top of New York's financial circles, and along the way she wins the love of executive (Harrison Ford). Things threaten to take a sorry turn when Weaver returns, but it is she who suffers from the consequences of her own past duplicity. Working Girl was Melanie Griffith's breakthrough film, proving than she was more than just the off-and-on "significant other" of Don Johnson. The film was later adapted into a brief TV series, starring a pre-Speed Sandra Bullock. ~ Hal Erickson, Rovi

Daniel B. Pollack
as Executives at Dim Sum Party

Madolin B. Archer
as Barbara Trask

Etain O'Malley
as Hostess at Wedding

How will the working class be educated to survive and thrive in the computer age? This intoxicating movie has an answer: let her strut her outer-borough wisdom from Wall Street to the Pacific Rim. Watch her fatten portfolios as she melts hearts.

Griffith's talent, energy, and sexiness give it some drive and punch.

The interaction between the female leads is so funny that you don't care if the leading man never turns up.

Wait... Sigourney Weaver and Harrison Ford can be funny? And Melanie Griffith can act? Crazy!

Working Girl, always fun even when at its most frivolous, has the benefit of the cinematographer Michael Ballhaus's sharp visual sense of board room chic, and of supporting characters who help carry its class distinctions beyond simple caricature.

A buoyant, emotionally gratifying underdog story, one that manages to be touching despite any of its minor follies

It never tries to be too dark, even though audiences will suspect an appropriately mature resolution for the setup.

Some would call that a happy ending. I'm not one of them.

Mike Nicols's comedy is frothy, fast-moving and impeccably put together.

This is a movie I remember from when I was young. It used to be on tv a lot and it was one I was allowed to sit up late and watch. I haven't seen it for quite some time, so I was happy to find the DVD for $6. I have to admit, it did not age quite as well as I thought. That is some spectacularly bad hair on Melanie Griffiths, even by 80's standards. There's a lot I still like about this movie - strong young woman bettering herself and working her way out of the typing pool, and moving on from a cheating sleaze who doesn't treat her well, but through adult eyes, I really didn't like that she still actually did need the help of the man to get there. And I had a few cynical smiles at the "happy ending". Day in day out at the office - it may not be all it's cracked up to be!

I'm sure this Oscar-winning Mike Nichols film about a capable woman, forced to wile her way up the corporate ladder, was quite groundbreaking for its time, but the big bouffant hairdos, the office pool of secretaries, and the crass Joisey accents just date this movie too much. I could also see the big three-way twist coming from a mile away. Furthermore, Carly Simon's melodramatic, gospel-inspired, Oscar-winning song, "Let the River Run," - with all its talk about "sons and daughters" and "New Jerusalem" - seems more fitting for a Merchant Ivory movie about a diaspora born of religious persecution or something rather than professional and romantic hijinx.

Captivating workplace comedy follows an ambitious secretary as she attempts to climb the corporate ladder. Plot unfolds like the somewhat timeworn Cinderella story archetype, but brilliantly captures the zeitgeist by updating it to corporate America of the 1980s. Melanie Griffith is an absolute delight in an effervescent performance as Tess McGill, a secretary with "a mind for business and a bod for sin". She's supported by an talented cast that includes Harrison Ford and Sigourney Weaver in equally memorable parts. Classic film director, Mike Nichols, is in top form here and he is ably supported with an witty script by screenwriter Kevin Wade. Sometimes, success is the best revenge.

it surprises me this got low on the stars because i really really enjoyed this film i think really you can put it in the genre of romcom drama because its funny and you see a romance blowup and slowly grow between the underdog and the top dog! i just think its brilliant the way melenie griffith plays the underdog trying to work her way up the chain but sigorney weaver is the two faced bss who says shes helping but really stealing her ideas really People can relate to this story of how you work your way up but it comes with all the complications!! its a great powerful and heartened film