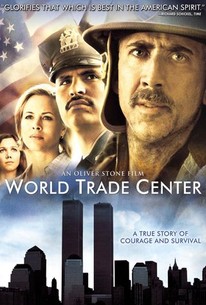 Critics Consensus: As a visually stunning tribute to lives lost in tragedy, World Trade Center succeeds unequivocally, and it is more politically muted than many of Stone's other works.

Critics Consensus: As a visually stunning tribute to lives lost in tragedy, World Trade Center succeeds unequivocally, and it is more politically muted than many of Stone's other works.

Critic Consensus: As a visually stunning tribute to lives lost in tragedy, World Trade Center succeeds unequivocally, and it is more politically muted than many of Stone's other works.

Director Oliver Stone once again offers a powerful and provocative story based on real-life events in this drama. Sergeant John McLoughlin (Nicolas Cage) and William J. Jimeno (Michael Peña) were two officers assigned to New York City's Port Authority who were working their beats on a quiet day in early fall when they received an emergency call. The day was September 11, 2001, and McLoughlin and Jimeno were among the policemen who attempted to evacuate the World Trade Center towers after they were struck by airliners piloted by terrorists. Both McLoughlin and Jimeno were inside the fifth building of the World Trade Center when the towers fell, and were two of the last people found alive amidst the wreckage. As McLoughlin and Jimeno struggled to hold on to their lives as rescuers sifted through the rubble, their spouses -- Donna McLoughlin (Maria Bello) and Allison Jimeno (Maggie Gyllenhaal) -- clung to the desperate hope that their husbands would survive and be found. As the McLoughlin and Jimeno families waited for word on the fate of the two men, they watched as a city and a nation came together with strength and compassion in the face of a tragedy. World Trade Center was based on the true story of John McLoughlin and William J. Jimeno, both of whom cooperated with producers in the making of this film. Producer Debra Hill died during production -- hence the posthumous credit. ~ Mark Deming, Rovi

Michael Peña
as Will Jimeno

Marcos Palma
as Street Hood No. 2

Admittedly, there are a few great shots... But, still, none of it says anything new. And it's just so sentimental.

(Director Oliver) Stone has concentrated on one of the catastrophe's stories and has fashioned it well -- with almost palpable physical detail, and with performances that never sink to exploitation.

It celebrates the courage of the rescue teams and the fortitude of their families while giving you a visceral sense of what it was like to be among them.

It's almost as if Stone wants to ingratiate himself with the mainstream public that rejected his historical blockbuster Alexander and win the approval of his right-wing critics.

Even without his box of political tricks, Oliver Stone remains the foremost cinematic shrink for America's distress.

Destiny pervades the project, and anyone who expected Stone to toe anything other than the company line was gravely mistaken.

I can't recommend World Trade Center, but I will say I respect the effort. Still, I think the material deserved a better final product than the one that Stone has delivered.

Alas, [Oliver Stone's] approach to the events of 9/11 come from the most banal and disconcerting elements of Hollywood filmmaking

Does justice to this significant event in modern history by resisting the urge to deliver a final verdict on how or why it happened.

I started crying when I was writing this review. It is a tough movie. You are going to cry, but I urge you to see it. And when was the last time you saw or read something that made you feel positive about the human race.

Will Jimeno: Don't fall asleep, Sarge!  "A True Story of Courage and Survival." World Trade Center is a sad, moving film from Oliver Stone that tells the story from a couple of cops and their families point of view. The film isn't necessarily a thrilling movie to watch in standard terms, but there is a great sense of suspense, especially if you don't know what happens. It's hard to watch at times because the emotions seem so real, but there's no way you'll look away from the screen. This is a story that needed to be told and thankfully it was.  Port Atlantic cops respond to a plane flying into the World Trad Center. There's rumors amongst them that the second building got hit too, but none of them know for sure what is going on. The sergeant decides to take a team into tower one to try to save anyone they can, but as soon as they are about to go up, something happens. They don't really know what, but it leaves most of the team dead and a few of them trapped beneath the rubble. The only way they can survive is by trying to stay awake until someone finds them beneath all of the rubble. This isn't Oliver Stone's best movie, but it is just like most of his, in that it is extremely important. You'd be surprised to see that Stone doesn't take a political stance on the attacks, which really surprised me the first time I saw it. Instead, he shows us that day from the vantage point of a few cops and they didn't really have any idea what was going on. We almost relive the day as we watch news footage and see everyone crying. It's not a movie about the attacks, but a movie about two cops and their fight for survival.  The cast brings out the most in this movie. I know everyone has their own opinion on Nicholas Cage, but I thought this was one of his best roles in the last 10 years or so. Also, another standout is Michael Shannon as an un-active marine that makes his way to Ground Zero to try to find any survivors. The movie is told with a true sense of humanity and caring about others lives even when it could cost them theirs. World Trade Center is a movie that everyone needs to see once.

This is one of Oliver Stone's best films. Although not as powerful as United 93, World Trade Center tells the courageous true story of two firemen, John McLoughlin and Will Jimeno Two Port Authority officers that were stuck in the debris of the World Trade Center upon the collapse of the towers on September 11, 2001. World Trade Center is good drama that tells the human side of these atrocious acts. Nick Cage is surprisingly good here, compared to his other efforts. Although not as powerful as United 93, which in my opinion is the definitive film on the 9/11 attacks, this is nonetheless a must see film with great performances, a good cast, good directing and a powerful true story. This is of course a hard film to watch, one that will stay with you long after you've seen it. I thought the film played well on the dramatic elements of this real life tragedy without overdoing it. Oliver Stone has struggled with making good films, but this one is one of his best efforts since The Doors and Natural Born Killers. The film is a human story, which in away sort of echoes Stone's Platoon, in the sense it shows the chaos for what it is. But the difference is, is that World Trade Center has a deeper sense of inspiration, a heart within the chaos unfolding on-screen. This ranks among Oliver Stone's best films.A truly unique film, this is a film that will stay with you from start to finish.

Very sad as it is true story about the collapse of the Twin Towers. It follows two policemen who are trapped in the basement of one of the towers. Stars Nicholas Cage. There was controversy when the movie came out stating it was too soon after 9/11.

Heartbreakingly poignant! A must see!