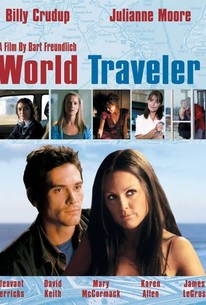 Following up on his acclaimed debut The Myth of Fingerprints, Bart Freundlich spins this drama that poses the question "what would it be like to run away from your life?" The film centers on a restless thirtysomething New Yorker named Cal (Billy Crudup) who one day drives off into the open road, leaving his wife and infant son behind. A series of flashbacks describe Cal's domestic malaise and disillusionment with his life. On the road, Cal encounters a number of unusual characters who are similarly tethered and drifting. One is named Dulcie (Julianne Moore), an emotionally fragile woman looking for her lost son. Through his interaction with Dulcie, Cal reflects on his own family and soon finds himself heading to his boyhood home where his father lives. This film was screened at the 2001 Toronto Film Festival.

With no real redemption at the end of the road, it is nothing more than a beautiful, empty journey.

Were it not for a sentimental resolution that explains way more about Cal than does the movie or the character any good, Freundlich's World Traveler might have been one of the more daring and surprising American movies of the year.

This episodic, quietly affecting movie is both gritty and poetic.

Yes, I suppose it's lovely that Cal works out his issues with his dad and comes to terms with his picture-perfect life -- but World Traveler gave me no reason to care, so I didn't.

The subtlety of how the story is told is beautifully done

I, for one, hope Freundlich gets another shot at a feature. And if he gets it, I hope he proves he knows what to do with it.

The only reason for watching such a shallow and worn drama is because of Crudup's subtle performance.

Whatever complaints I might have, I'd take [its] earnest errors and hard-won rewards over the bombastic self-glorification of other feel-good fiascos like Antwone Fisher or The Emperor's Club any time.

The story ... is moldy and obvious.

With Freundlich and Crudup in the front seat, I found that once I could see the road, I was able to sit back and just enjoy the ride.

A moving story about lost fathers and lost sons. Billy Crudup always picks his roles with care, often looking to play unique characters who are searching for something, are damaged somehow, and are in need of healing. Julianne Moore plays well the wandering mother, traveling to connect with her son at a train station somehere out there in space and time. Willie Nelson provides the bulk of a memorable soundtrack. A must-see for Crudup fans, and an interesting part for David Keith, whom I'd like to see back doing more films.