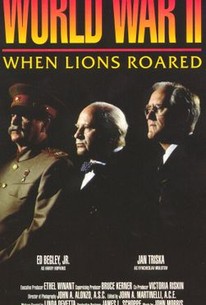 This made-for-TV historical drama focuses on the sometimes uneasy alliances between three of the world's great leaders -- Franklin D. Roosevelt (John Lithgow), Winston Churchill (Bob Hoskins), and Joseph Stalin (Michael Caine) -- as they met in 1943 for the Tehran Conference, in which they discussed the Allied drive against Germany and the possible postwar relationship between the three nations. With all dialogue for the three principle characters drawn from transcripts and reporting of the event, Then There Were Giants was first aired as a two-part miniseries; it was later released on home video under the title World War II: When Lions Roared.

The actual face-to-face meetings of the Big Three--at Tehran in 1943 and at Yalta in 1945--are the centerpieces of When Lions Roared, just as these conferences were the strategic centerpieces of the war itself.

There are no featured audience reviews yet. Click the link below to see what others say about World War II: When Lions Roared!