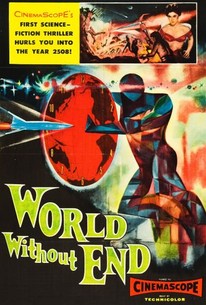 More than one science-fiction fan has noted the marked similarities between World Without End and H.G. Wells' The Time Machine. Hugh Marlowe plays Borden, the skipper of a quartet of astronauts returning from Mars to Earth in 1957. During reentry, the ship passes through a time warp, landing on Earth in the year 2508. The astronauts soon learn that, after the atomic war of 2188, mankind split into two factions, the Underground People and the Surface Beasts. Because the "Underground" population is declining, Borden and his equally virile crew -- Galbraith (Nelson Leigh), Ellis (Rod Taylor) and Jaffe (Christopher Dark) -- are expected to cohabit with the gorgeous female population. A jealous underground male (Booth Colman) tries to frame Borden on a murder charge, but these petty details are forgotten as the astronauts help their new friends reclaim the upperworld from the hideous Surface Beasts. Stock footage from World Without End later resurfaced in Queen of Outer Space, which like the earlier film was directed by Edward Bernds.

Mickey Simpson
as Naga
View All

Critic Reviews for World Without End

Instead of being talky and boring, it's mostly talky and corny.

Enjoyable, silly, cheapjack sci-fi for those in the mood.

Audience Reviews for World Without End