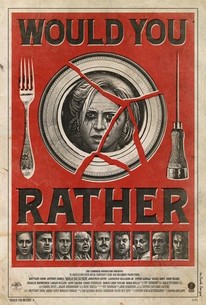 Would You Rather Photos

In the wake of her parent's death, Iris (Brittany Snow) struggles to make ends meet while caring for her terminally ill younger brother. Shepard Lambrick (Jeffrey Combs), a seemingly philanthropic aristocrat, expresses an interest in helping them. When he invites her to an exclusive dinner party, she accepts. Also attending the dinner party are seven more desperate individuals. They soon find themselves trapped in Lambrick's mansion and forced to play a sadistic game of Would You Rather, where the winner will be awarded untold amounts of money. As the game progresses, the dilemmas Iris and the other players face grow increasingly deadly. (c) IFC

Robb Wells
as Peter
View All

Critic Reviews for Would You Rather

Hardly a most dangerous game night at the movies.

Director David Guy Levy's witless homage to the "Saw" franchise and its ilk.

With a bit less grisliness, it could have been a mystery dinner-theater performance.

Would You Rather is a horror film in the truest sense, opening up frightening doors in our minds and making us look at parts of ourselves. It's not easy, but it is well-done and extremely compelling.

An ungainly horror film that tries to twist the genre in a new direction, but fails utterly. There are some truly horrific scenes, but nothing worth remembering afterwards.

An entertaining and incredibly demented commentary on how easily our wills can break when given the proper price tag.

It's a striking yet simple premise that is, for the most part, employed to watchable (if unspectacular) effect by director David Guy Levy...

A Frankenstein abomination that mates Dinner for Schmucks with Saw.

Jeffrey Combs is pretty much the reason to see this (or just about any) film.

Audience Reviews for Would You Rather

Forget the mainstream critics reviews.This movie will mostly be enjoyable to horror fans. Not to bash the critics, but don't they read the movie description before watching, like: "She arrives to find herself ... forced to play a sadistic game of Would You Rather, where only the winner will get out alive." That line should either turn them off completely, or at least force them to review it from a fan's perspective. The movie has a great premise AND original story with fine acting to boot (rare in a B-movie). Budget limits are effectively managed so that you barely notice the low budget impact. In fact, because some of the more horrific scenes are not shown they are more cringe-worthy as your mind gets to fill in the details. But the standout is Jeffrey Combs of Reanimator/From Beyond fame that plays the host of the WORST DINNER PARTY GAME EVER! He balances his sociopathic morality with a genteel propriety that makes his character stand out from the disposable extras. The twist ending is predictable and you wish the more dastardly character deaths were more horrific, but overall it is a very entertaining horror flick. The late, excellent Roger Ebert, would hate this movie, but I would never use his review for a horror movie. The average soul just wants to be entertained, and this flick, if you can handle a razor blade near the eye, does just that.

Seems that I have seen this premise before, but this had a little bit of a twist to it. Other than that, not the most original of movies....

This is not a movie to watch with the kids! lol Good horror/thriller/gross out movie.

Would You Rather Quotes