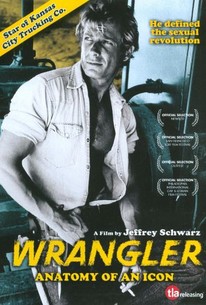 Wrangler: Anatomy of an Icon Photos

1970s-era gay porn icon Jack Wrangler serves as the lusty subject of this biographical documentary tracing his trajectory from scrawny Beverly Hills brat to aspiring star and, ultimately, a brand name with his own exclusive product line. The son of a demanding Hollywood production executive who worked on the hit western series Bonanza, Wrangler would rise through the ranks to become one of the most successful adult film stars of his generation. Later in life, the charismatic stud would defy fan expectations by moving in with noted songbird Margaret Whiting and establishing himself as a legitimate theater director. In addition to featuring classic clips from some of Wrangler's best-loved films, this documentary also offers reflections by such noted fans as Marc Shaiman, Bruce Vilanch, and Chi Chi La Rue.

Critic Reviews for Wrangler: Anatomy of an Icon

What a character, and what a life

Audience Reviews for Wrangler: Anatomy of an Icon

There are no featured audience reviews yet. Click the link below to see what others say about Wrangler: Anatomy of an Icon!

Wrangler: Anatomy of an Icon Quotes