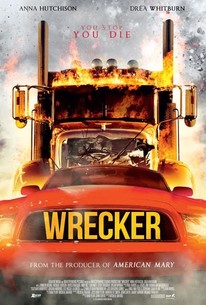 Best friends Emily and Lesley go on a road trip to the desert. When Emily decides to get off the highway and take a "short cut," they become the target of a relentless and psychotic trucker who forces them to play a deadly game of cat and mouse.

Don Knodel
as Man in Diner

Celia Reid
as Woman at End

Less a chase picture than a driving-around picture, the movie relies heavily on long action sequences that never develop much zip.

Time and again, the filmmaker cuts the money shot meant to theoretically cap a sequence.

Don't even think of wasting your well-earned shrugs on Wrecker.

The film's only plus points are a few jump scares, slickness and the scenic great outdoors, where it was shot. Apart from that, there's little else to recommend.

Pitched somewhere between Duel and Joyride, this motor-psycho picture fails to stake out new territory or ring any significant changes on a decades-old formula.

It's fast, slick and lovely to look at, but there's absolutely nothing there beneath the hood.