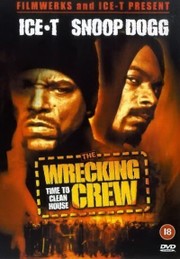 Vera W
½ September 9, 2012
Curiously, this awful film has one salient good point-- the soundtrack's rap lyrics nicely parallel the character's struggle in any given scene, and provide an underlying video montage like quality to this rather chaotic affair. Let's face it. Rap music is incredibly limited in its range of emotion and subject matter, but here, it rather works, simply because there is absolutely nothing else for the viewer to focus on.

This film is a technical abortion, with muddy sound, and an absurdly grainy film texture added in post, which was apparently meant to hide low production values, and a lighting so grotesque it appears to be an intentional distressing of the handsome black male leads with curiously manicured coifs. In most of the scenes, the beauty is successfully covered up-- the players often look like they've been embalmed, screwed, fried, and freeze-dried.

There is only one location in the entire film-- an abandoned warehouse. The characters muddle through from room to room, fighting "the cartel," and mysterious demons who never really appear. Like the actors in this low budget fever dream, these characters don't seem to know where they are, or who they're after.

The book lacks any subplot, any B or C story line, We're always with the main characters-- Sly, Hakiem and Josef, a holdover from the first of the Urban Trilogy called Urban Menace, another headache of a film. Here, there is no clear antagonist, and many of the characters lack any convincing detail which might root them in a Detroit warehouse in early Winter.

The screenplay just reeks of extended arguments, duplicate conversations, clumsy improvised dialogue, further tainted by low budget wide shots of up to two minutes in length, with no closeup in sight. Actors struggle to fill up the missing logic and canyon-like pauses with confused facial expressions, and stage business in an effort to say, "There's got to be some point of focus in this dramatic action here, and if we get to the end of this scene and there isn't one, I'm going to make one up if I have to!" The lack of story put extra pressure on the improvising actors to build meaning into this absurd excuse for Black gunfights in a warehouse. As the scenes wear on, you can see that the actors give up, and one of them even appears to be replaced at the end of the film with a lookalike actor.

Most unforgivably, however, is the cameo preamble footage of Snoop Dogg in an apparent on camera interview where he mumbles sheepishly about the origins of rap music, and the parties responsible. This preamble has absolutely nothing to do with the narrative of the film, and belongs as an extra feature. Couldn't they get Snoop to say, "The syndicate has some house cleaning to do. And we're going to do it right now"? If they could have wrangled him to say that, it may have given some credence to the story idea that these two local bands of brothers were fighting some larger organized syndicate.

Then again, maybe Snoop was wise to steer clear of the twisted story here, after all.

Andrew M
½ May 14, 2009
Wow. Just wow. Just when I had hoped for an improvement on the pile of excrement that was Urban Menace, along come its Inbred Sheep shagging Bastard son, The Wrecking Crew. The plotline says this film is trying to "complete a deadly mission". If it's to drive suicide rates up, then that's probably accurate. If it's anything else, then you're fooling yourself. This goes together like going cold turkey and Amy Winehouse (ie: it doesn't).

Erik R
July 27, 2008
This is by far the worst move I seen EVER. The move is shoot with something similar to a surveillance camera. My friend and I could just bare to see the first 10 minutes, the rest of the movie was fast far wared. Needless to say, the rest of the movie took place at pretty much the same location as the beginning of the movie.
Conclusion? A sleeping pill and a disgrace to the art of motion picture.

Devlan R
November 22, 2007
It's impossible to describe this film without giving away its beautiful, deadly secrets.
Gangsta as Hell.
And Bad. Very Bad
Page 1 of 1