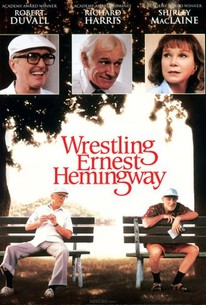 Critics Consensus: Predictable but moving, Wrestling Ernest Hemingway is an understated and melancholic drama that gets plenty of mileage out of an outstanding cast that includes Robert Duvall, Richard Harris, Shirley MacLaine, and Sandra Bullock.

Critics Consensus: Predictable but moving, Wrestling Ernest Hemingway is an understated and melancholic drama that gets plenty of mileage out of an outstanding cast that includes Robert Duvall, Richard Harris, Shirley MacLaine, and Sandra Bullock.

Critic Consensus: Predictable but moving, Wrestling Ernest Hemingway is an understated and melancholic drama that gets plenty of mileage out of an outstanding cast that includes Robert Duvall, Richard Harris, Shirley MacLaine, and Sandra Bullock.

Richard Harris and Robert Duvall star in this low-key /drama concerning a hard-drinking former sea captain (Richard Harris) who befriends a shy retired barber (Robert Duvall). Though their polar-opposite personalities find the relationship slow going at first, roguish Frank (Harris) and gentle Walter (Duvall) soon develop a close friendship as they pass the days with conversation. As death looms near and their pasts seem to evaporate into the air with the passing of each day, the lonely souls find comfort in each other's company until their fragile friendship is shattered. When Frank insults a waitress (Sandra Bullock) with whom Walter harbors a protective friendship, Walter makes the decision to cut his ties with loutish Frank. Forced to reevaluate their friendship, the two lonely souls attempt to find meaning in their lives as their chances for connecting with the outside world grows ever more dim.

Persephone Felder
as Woman in Stands

Wrestling Ernest Hemingway aspires to be serious about its subject. Yet in a curious way this sobriety works against it. Frank and Walt turn into schematically contrasting case studies, and the movie's sympathy for them eventually becomes patronizing.

Randa Haines' sappy, rather dull melodrama about the friendship between two eccentric old men is mostly a showcase for its stars, Robert Duvall and Richard Harris.

There aren't really any surprises, but it's a delight to see a movie which idles away without anything more pressing on its mind than people.

Instead of simply assuming that the old have interesting lives, the film never stops congratulating itself for being daring enough to focus on them.

The movie is essentially about the close observation of behavior. Like some of Hemingway's stories, the real action is all implied. The characters trade small talk, and we sense that larger issues are lurking beneath their cheerfulness.

An endearing buddy movie for the senior crowd.

Wrestling Ernest Hemingway is a superior example of the Old Codgers Flick, that sub-species of the Buddy Movie dealing with lonely, disparate old-timers bonding and bellyaching in endearing fashion.

Offers little in the way of narrative drive or plot conflict, and what does happen is far from surprising. MacLaine and Piper Laurie are more or less wasted in supporting roles, and pretty Sandra Bullock is given almost nothing to do.

This is a film of two superlative performances from Richard Harris and Robert Duvall, who play an odd couple drawn together by their common loneliness as they become friends in the winter of their lives

A deeply moving and wonderfully acted film about loneliness and friendship. This is one to treasure.

A slow-paced and sentimental film, but still a pleasure to watch as the two brilliant and dignified leads play off each other so well.

There are no featured audience reviews yet. Click the link below to see what others say about Wrestling Ernest Hemingway!