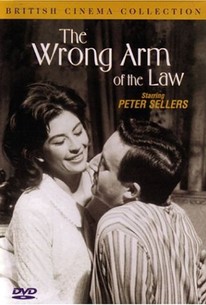 The Wrong Arm of the Law Photos

When a gang of London thieves, disguised as policemen, begin robbing other thieves....well, that's just not cricket. Benevolent burglar Peter Sellers, the man in charge of all "respectable" crooks in town (he even offers such incentives as a vacation plan and filmed training sessions!), sets about to ascertain how the renegade criminals have received inside information concerning upcoming robberies. He arranges a temporary truce with Scotland Yard so that both criminal and constable can work together in nabbing the miscreants. Alas, he must now contend with incompetent peacekeeper Lionel Jeffries, who poses an even greater threat than the "mole" who's been tipping off the phony cops (who is closer to Sellers than he'd ever suspect). Short, simple and sweet, the black-and-white Wrong Arm of the Law manages to pack more solid laughs than any three of Sellers' later overproduced Technicolor vehicles combined. ~ Hal Erickson, Rovi

Ed Devereaux
as Bluey May

Dick Emery
as Man in Apartment

Marianne Stone
as Woman in Front Row at Meeting
View All

Critic Reviews for The Wrong Arm of the Law

I felt I had been hit over the head by blunt instruments for two hours.

Audience Reviews for The Wrong Arm of the Law

A criminal syndicate joins forces with the police to foil a gang impersonating police officers in this nostalgic British caper comedy that has an idea of cops and robbers you would not see outside of The Beano these days. Peter Sellers does his usual loveable rogue, up against Lionel Jeffries' usual self-important buffoon in a world where crime syndicates are like a union of old lags, who share a gentleman's agreement with the police, and happily sit down to discuss shop with them over a nice cup of tea and a couple of angel cakes. In fact the reason I found this film amusing was not so much the jokes, but the way the "villains" would happily go quietly with unarmed bobbies, just because they tapped them on the shoulder and said "'Allo 'allo 'allo, you're nicked!"; Guy Ritchie it ain't! Never more than mildly amusing, but a pleasant enough trip down memory lane to a past that probably never existed in the first place.

The Wrong Arm of the Law Quotes