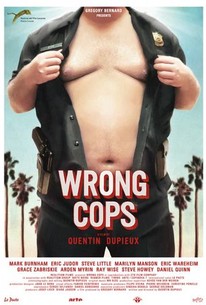 WRONG COPS is Quentin Dupieux's 3rd movie produced by Realitism Films. It is a filthy 90 minutes comedy about some disturbed cops. It is not a sequel to WRONG. Quentin Dupieux is just lazy with titles. FACT #2 : WRONG COPS chapter one (13 minutes) featuring Marilyn Manson has premiered at the 2012 Cannes Festival (Director's Fortnight). FACT #3 : WRONG COPS pilot (3 chapters) will be screened at Sundance Film Festival : - Sunday January 20th at 11.30pm 2013 at Prospector Square Theatre - Monday January 21st at 8pm 2013 at New Frontier Microcinema FACT #4 : WRONG COPS chapter one (remastered) will be released digitally on the high level short films platform elevision. FACT #5 : If you don' t know Quentin Dupieux yet, you should check out RUBBER and WRONG or maybe download his stupid music for free here (yes he makes music too, wow). (c) Official Site

It's tonally weird and totally forgettable.

No doubt a labor of love, the result is just plain laborious for the audience.

Pitched somewhere between a DIY alt-humor video and a knockabout comedy, this meandering lark about a corrupt, spiteful and hopelessly distracted police force in a decriminalized, sun-scorched city never quite finds the funny bone.

Improves on its predecessor by being effectively plotless.

While it's certainly not a traditional holiday movie to watch with the family, its timely release and cult impressions could make for one very unforgettable, and one very Wrong, Christmas experience nonetheless.

If you are tired of mainstream movies, why not give this a chance.

Doesn't have structure, but there are laughs, especially for viewers on the prowl for weird stuff from a helmer who's become quite skilled at concocting ludicrousness.

For the right/wrong sensibility, there's reason to enjoy the filmmaker's weird attempts at stripping the ordinary from the everyday.

Dumb is a word you use as a kid, but it's the only way to describe Quentin Dupieux's latest, WRONG COPS.

Some of these routines are hilarious, others forced, but they're all routines, not parts of a cohesive work.

Los Angeles cops sell weed (hidden in dead rats), harass aerobics dancers, blackmail each other, and compose electronica; anything but fight crime. With a few exceptions (like a fatally wounded music aficionado who refuses to kick the bucket), this black comedy from Quentin Dupieux is missing the unique conceptual meta-humor of his first two movies, RUBBER AND WRONG, and plays more like mildly edgy sketch comedy---it's almost mainstream.