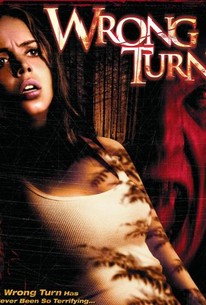 Critics Consensus: An unremarkable slasher flick that fails to distinguished itself from others of its ilk.

Critics Consensus: An unremarkable slasher flick that fails to distinguished itself from others of its ilk.

Critic Consensus: An unremarkable slasher flick that fails to distinguished itself from others of its ilk.

Chris has a job interview in Raleigh in three hours and he's making good time--until an accident miles down the highway turns Chris' manageable trip into a six-hour wait. Determined to make his critical appointment, Chris makes a hard U-turn and heads back up the West Virginia highway. Running low on fuel, he finds a shortcut, it's clearly a road less traveled, but to Chris it seems to be a quick fix to avoid the traffic jam. Not far away, Jessie and her friends, Carly, Scott, Evan and Francine, stand quietly--stunned as they survey what's left of their road trip after the tires blow out on their SUV. They've been left stranded, deep in the middle of the woods. Chris heads down the dusty road, accidentally hitting the SUV along the way, scattering the foursome around it. Luckily no one is seriously hurt in the collision, but egos are bruised and tempers flare. Chris is apologetic, and Jessie is the calming force when she discovers that the reason they're in their predicament is that barbed wire had been stretched across the road. Therefore, their blown out tires were seemingly the result of a prank. The group quickly bands together, determined to find a phone. Evan and Francis stay with the cars, as the other four make their way down the road. As they venture deeper and deeper into the woods, the assumed idea that the trap was set by a prankster grows dim upon their discovery of a mountain cabin filled with grisly hunting weapons and horrific souvenirs of the hunt. They are now certain that whomever--or whatever--lives in the cabin is responsible for the barbed-wire trap that derailed their trip. What the foursome doesn't know, however, is that Evan and Francine are now dead, mercilessly mutilated by three gruesome mountain men. Facing an uncertain and possibly horrific fate at the hands of these men, the four friends are sure of one thing: they will never go camping again.

The Weekly Ketchup: "Transformers," "Indy 4" Set Pics, And More "Transformers"
Another Stephen King Flick: This Time It’s "Insomnia"
Eliza Dushku Gets Ready to Do the "Mamba"

This could have been a half decent cross between a Romero zombie movie and The Texas Chainsaw Massacre but in the end the gore is so ridiculously overdone and the script so lame, that it undermines all sense of suspense.

Headed in only one direction: straight into the toilet.

The scares are legit, making this one of the better pure sit-in-the-dark-and-tell-a-scary-story horror flicks to come down the pike in quite some time.

While this movie doesn't have the warped sensibilities of 1977's similarly plotted The Hills Have Eyes, it has decent performances and genuine suspense.

It's gruesome and nasty and a heck of a lot of fun for people who get a kick out of Fangoria.

A blood-simple backwoods spatterfest that makes shameless use of the same old antirural moonshine Hollywood's been bootlegging for decades.

This horror flick about young campers stalked and slaughtered by gruesome backwoods barbarians is a fairly decent crossbreeding of Friday the 13th and Deliverance.

The understatement of the year. Essentially, ax-wielding rednecks unite in a slasher flick that drives itself into a brick wall of no return.

It gives what it promises: violence, creeps, and solid performances from the great cast...

A cut above the recent lot of slasher films...it does not feel as if it has to cater to audiences who want every plot point spoon fed to them.

[img]http://images.rottentomatoes.com/images/user/icons/icon14.gif[/img] This throwback nature slasher is likely to be a love or hate piece among most horror fans. Originality is definitely not the film's strongest point and it's numerous similarities with vintage pieces like "Deliverance" and "The Hills Have Eyes" are so obvious that one might dismiss it as a stupid, lazy, ordinary, ruthless, derivative slasher flick. But Wrong Turn is none of the above apart from the latter. If completely conventional Wrong Turn nevertheless manages to get everything you'd expect and would want from a wilderness horror movie right. It fits tab A into slot B perfectly well with some fairly inventive direction, good shock horror, a fun set up and some good gore. But the bonus in all this is decent performances of characters that you actually grow to care about as it unfolds. Personally I can't remember sitting through a generic slasher without wanting somebody to die within the first 10 minutes. But it never became innocuous and remained consistently scary. It's also very up front about the films it references which makes it's underlying playfulness and utter predictability that much more fun. The defining moment of the entire film for me, was when a character said "need I remind you about a film called Deliverance". Out of all the asinine shlock that's been released in the last ten years like the empty torture porn movies that have given horror a bad name I would much rather watch Wrong Turn to remind me that there are still some good people in the horror industry today. It's gritty, scary and hugely suspenseful. Though you can see the ending from miles behind it takes you through it's acts with the enormous energy the new slashers lack and is overall entertaining. I think at bare minimum all popcorn and vomit flicks need to be as well put together as Wrong Turn. The film is far from perfect, so that's really saying something.

Very unrealistic, it moves too fast and has really poor acting. Might get a scare or two out of you, but that's about it.

Scott: We are never going into the woods again! "It's the last one you'll ever take." Wrong Turn is easily the most unoriginal horror film I have ever had the displeasure of watching. The plot steals ideas from The Texas Chainsaw Massacre, lines from The Blair Witch Project and ends up basically being the ReRemake of The Hills Have Eyes. If you don't know what's going to happen next, you've probably never seen a horror film. If you are disturbed by this material, you have never seen a well done horror film. If you like this; either A, you are 12 years old and think every movie labeled horror that you see makes you a badass or B, you don't watch many movies. This movie is extremely unlikable and the scariest thing about it is that it doesn't feature Eliza Dushku's worst performance. Yeah, she has been worse. Watch The Alphabet Killer and you'll see what I mean. The acting isn't really even worth talking about. It's one of those movies where you don't care about the characters. I want the guys to die quickly and leave the very attractive girls for last. Yeah they are horrible actresses, but damn. Then I want the girls to have a nice lesbian scene(never happens), then they can dies. I'm not a pervert, but it is the only thing that would make the movie at all interesting. The characters are dull and stupid and the plot has been done before; what else should be looking forward to. The sad thing is that it seems like director Rob Schmidt thinks he is shocking and disturbing. I don't think that's true, but at least it seems that way. He has to know everything about this movie has been copy-pasted from better movies. It actually turns out to be pretty offensive to horror fans. He thinks we are going to enjoy this. He was sorely mistaken.

Those creatures scared me so much. I was hiding under my covers and was genuinely scared. A great horror film!