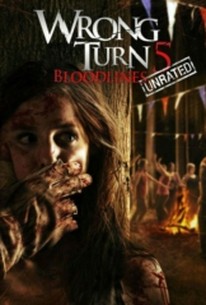 Radoslav Parvanov
as One Eye

the butchered meat on offer here has long since lost its freshness.

Unfortunately, the Wrong Turn series is becoming more like the Leprechaun series than anything else.

Cheap, dumb, and not even remotely scary -- but it has lots of crazy kills and nasty splatter, which is why it exists.

Possibly the best out of the popular horror series. When a group of college students visit the Mountain Man Festival on Halloween night, those familiar cannibals know it's the right time to make an appearance and kill some unlucky kids! Ok, so its all familiar now but if you are a horror fan then Wrong Turn 5 has what you need; gore, good kills, some jumpy bits, sex and a good looking main cast(including British hottie Roxanne McKee) as well as a decent turn from horror icon Doug "Pinhead" Bradley. The musics also pretty cool. Much better than 4 in pretty much every way, Wrong Turn 5 is actually quite a fun, exciting, gory little horror!

WARNING! THIS REVIEW CONTAINS SPOILERS!!! There are three fundamental rules when making a violent horror film: 1. Make sure that any violence in the film is realistic, or, if it isn't, that there is justification for it being unrealistic. 2. Make sure that the film you are making is more story than gore. 3. Make sure that there is actually a decent story to the film. Wrong Turn 5 makes the stupid mistake of breaking ALL 3 RULES! Having seen only one other film in the series, Wrong Turn 4, I began watching with very low expectations, and I'm glad I did. The general plot says that a bunch of young adults go out to a music festival to get high and the rest of it, but are stopped in their tracks when they crash their car due to a pedestrian waltzing around in the middle of the road. Skip a few boring moments, and you'll find that these kids are now in jail for possession of illegal drugs. They find that the guy they are in jail with is a complete nutter, and is connected to the three cannibals the Wrong Turn series show with pride and confidence, as well as being part of a plan to kill people for the hell of it, and to help the cannibals themselves. This is about all the "plot" that exists in the film. From the moment the villain says "You won't make it through the night. My boys are coming for me!" it was blatant how the film would end: baddie escapes with cannibals, lots of people die. My prediction was right, and oddly enough this was almost exactly the same with Wrong Turn 4... So, with a predictable story arc, no plot, the only thing the film could rely on to maintain interest were plot twists, humour, or all out realistic gore. So what do they do? Throw in no plot twists, next to no humour, and create some rather unreal gory scenes. The opening involving removal of a middle finger was amusing admittedly, but the blood coming from said wound was almost black. Last time I saw human blood, I'm pretty sure it was red... Or maybe this is some plot twist for a spin-off series about aliens to try and steal more money from viewers, thinking we won't notice that the films are dreadful... The other issues with gore was that a lot of it relied upon CGI, which is a major mistake when using blood spurts. If I hit someone on the back of the head with a chisel, I expect a blood pack to burst causing a realistic effect, not a blatently face effect super-glued to the film reel. The only other major problem with gore in the film was the amazingly stupid logic during a scene where a female character is sliced open, and force fed her own entrails by a cannibal. This scene was clearly for shock, and was rather impressive effect wise. But hang on... The guy doing this is a cannibal. Why would a cannibal waste food by feeding it to the victim when he could easily eat it himself? What did he gain from this? Nothing but a small pay rise is probably the answer... All in all, Wrong Turn 5 is one of the worst horror films I have ever seen, and makes the late Saw films look like the Shawshank Redemption of horror films. The one thing I really hope is that they don't think it's acceptable to make Wrong Turn 6. Call it quits now, Fox, or get a new director who actually knows how to make a decent film.