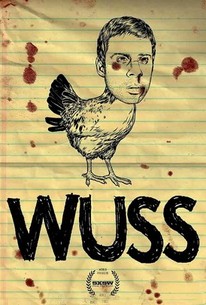 WUSS is the story of a high school teacher who faces constant ridicule after he's repeatedly beaten up by several of his own students. Having nowhere else to turn, he eventually teams up with another of his students to fight back. This student, a young girl, is feared school-wide because of a dark family reputation. She also has an unfortunate nickname grafted to her due to her predilection for smoking discarded cigarettes. Bonded in battle, the student and teacher form a friendship that stretches the use of the word inappropriate. Starring Nate Rubin (BLOOD ON THE HIGHWAY, MY MOM SMOKES WEED), featuring Tony Hale (TV's "Arrested Development") and directed by Clay Liford (EARTHLING, MY MOM SMOKES WEED). The film is a dark comedy that almost plays as a horror film, albeit one where nobody dies (except a little on the inside). Says Liford, "In most comedies, when characters do harebrained schemes they're never held accountable for them. I hold them accountable." (c) Official Facebook

Alicia Anthony
as Maddie Worth

Jonny Mars
as Steve Worth

"Wuss" may be slight, but Mr. Liford's sense of pitch is spot on.

While Liford's latest isn't a bad film, it fails at being either memorable or noteworthy, hindered most by a script that seems to flounder with direction.

There are no featured reviews for Wuss at this time.