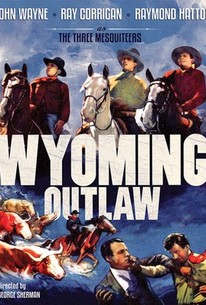 Forever keeping apace of current headlines, Republic's "Three Mesquiteers" series came up with the 1939 entry Wyoming Outlaw. The story is based on a true incident, wherein a disgruntled young lawbreaker took refuge in the mountains of Wyoming, successfully eluding a large posse for several days. The press had a field day with the story, labelling the fugitive a "Modern Robin Hood" - at least until he was shot down by a well-armed waiter. The movie version of this incident finds hotheaded Will Parker (Donald Barry), the son of recently fired highway worker Luke Parker (Charles Middleton), thrown into jail for violating the local game laws. Busting out, Parker scurries to the hills, hotly pursued by our heroes Stony Brooke (John Wayne), Tucson Smith (Ray Corrigan) and Rusty Joslin (Raymond Hatton). Not altogether unsympathetic to Parker, the Mesquiteers set about to capture the film's real villain, corrupt politician Balsinger (Leroy Mason), after the fugitive meets his fate at the hands of gun-toting gas-station attendant Newt (David Sharpe). ~ Hal Erickson, Rovi

Don 'Red' Barry
as Will Parker

Donald Barry
as Will Parker

Charles B. Middleton
as Father Parker

Elmo Lincoln
as US Marshal

It's what it is, a forgettable B Western.

There are no featured reviews for Wyoming Outlaw at this time.