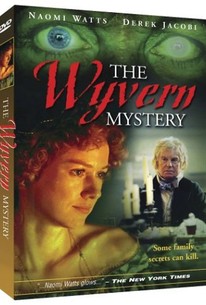 This two-part British miniseries was based on a classic gothic novel by Sheridan J. LeFanu. Having inadvertently caused the death of one of his tenants, wicked Squire Fairfield (Derek Jacobi) adopted the dead man's daughter Alice (Naomi Watts). No sooner had Alice grown to womanhood that the satyr-like squire attempted to "have his way" with her. Escaping the Squire's clutches, Alice eloped with Fairfield's virtuous son Charles (Iain Glen) -- but she was not quite out of the wood yet, thanks to a series of disturbing nightmares, a wraithlike mystery woman, and the machinations of Charles' diabolical brother Harry (Jack Davenport). The Wyvern Mystery originally aired on March 5 and 12, 2000. ~ Hal Erickson, Rovi

Critic Reviews for The Wyvern Mystery

I don't know Sheridan Le Fanu - not to speak to, that is - which makes the whole thing much jollier and less predictable.

Audience Reviews for The Wyvern Mystery

One of those movies you didn't hear much about, but you have to see. Naomi Watts is beautiful in this movie. From the BBC (United Kingdom) its worth the buy.