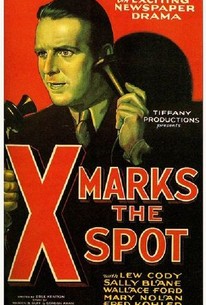 In this crime drama, the writer of a Broadway newspaper column finds himself accused of murder after a showgirl, who had been suing his paper for libel is found murdered. Just before she died, the columnist had been seen leaving her apartment. He launches his own investigation and discovers that he has met the real killer. The whole matter comes to a head during the ensuing trial and in the end, the writer and the killer end up locked in a room and are forced into a shoot out.

Helen Parrish
as Gloria as a Child

Joyce Coad
as Gloria
View All

There are no critic reviews yet for X Marks the Spot. Keep checking Rotten Tomatoes for updates!

There are no featured reviews for X Marks the Spot at this time.