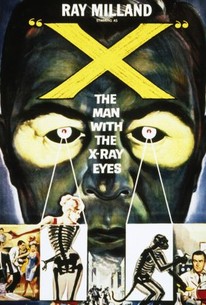 Critics Consensus: By turns lurid and disturbing, The Man with the X-Ray Eyes is a compelling piece of sci-fi pulp and one of Roger Corman's most effective movies.

Critics Consensus: By turns lurid and disturbing, The Man with the X-Ray Eyes is a compelling piece of sci-fi pulp and one of Roger Corman's most effective movies.

Critic Consensus: By turns lurid and disturbing, The Man with the X-Ray Eyes is a compelling piece of sci-fi pulp and one of Roger Corman's most effective movies.

In another first-rate Roger Corman production, Ray Milland is a scientist who discovers a drug that enables him to see through objects. At first he has lots of fun with his new-found talent, but as the drug becomes more addictive and he sees more and more, problems arise. A thoroughly enjoyable effort with Don Rickles giving a superb performance as a carnival barker.

Barboura Morris
as Nurse
View All

Critic Reviews for 'X'---The Man With the X-Ray Eyes

Director Roger Corman keeps this moving and Ray Milland is competent as the doomed man. Special effects on his prism-eye world, called Spectarama, are good if sometimes repetitive.

This queasy 1963 SF parable was directed--quickly and cheaply--by Roger Corman for American-International, drawing some of its strength from its tawdry drive-in overtones.

Intelligent sci-fi movie has a powerful performance from Milland.

Surprisingly level-headed and persuasive in its restraint and succinct dialogue.

This nifty slice of sci-fi basically plays like Corman's low-rent version of the 1957 classic The Incredible Shrinking Man.

The psychological nature of this tale's examination of a doctor with a God complex, to an extreme length, makes it a major classic of the sci-fi genre.

The possibilities suggested in the hints of addiction and inconsistent bouts of megalomania remain tantalizingly unexplored in the unfocussed script.... But there is a wicked edge to the B-movie machinations.

The bizarre ending has a resonating factor that helps enhance the film's enjoyment quotient.

Audience Reviews for 'X'---The Man With the X-Ray Eyes

All hail Roger Corman! A cult classic with all the trappings you'd expect from uber-cool low-budget 60's science fiction. It wasn't enough that the mad scientist could see through paper, clothes and skin. He kept pushing, kept experimenting until he saw things no man was ever intended to see, things no man should ever see [insert creepy music here].