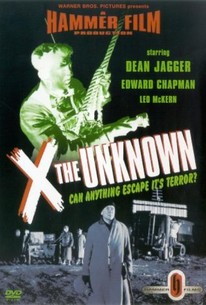 X the Unknown is a well-crafted imitation of the Quatermass British sci-fi pictures of the 1950s. A group of soldiers on maneuvers in Scotland stumble across a gravel pit which emanates an unusual amount of radiation. Several deaths occur before the radioactive material is mysteriously stolen. Researcher Dr. Adam Royston (Dean Jagger) speculates that the thief is some sort of inhuman monstrosity dwelling at the Earth's core. He points out that past radioactive disturbances have been occurring at 50-year intervals, each followed by sudden deaths and the disappearance of the material. Royston suggests that the unknown monster has been resuscitated by humankind's recent atomic experiments. Sure enough, the monster manifests itself as a huge slab of glowing radioactive mud (laugh now if you must -- you won't laugh when you see it). X the Unknown works well within its limited budget; unfortunately, many TV prints have been truncated, robbing some of the best horrific moments of their full impact. ~ Hal Erickson, Rovi

Critic Reviews for X: The Unknown

...a particularly British kind of horror; with an invisible monster that the professor hopes to combat with invisible radiation waves, there's quite literally nothing to see here...

After a series of prolonged climaxes, with its potential victims staring directly into the camera and shaking with fright, the "Unknown" finally emerges as a type of rolling rubber mattress, disappointingly unhorrific in content and appearance.

Despite its absurd storyline, it's a surprisingly entertaining film that won't deaden your brain cells even if it's a trashy B film sci-fier.

Fairly dreary sci-fi of the oozing monster stripe with a strong lead.

Audience Reviews for X: The Unknown

How many creatures features out Scotland way? Not veddy many. Making this all the more special as Dean Jagger plays an eccentric American nuclear scientist who with local Leo McKern (one of the silly bad guys from the Beatles "Help!") combat a primordial sentient from beneath the earth. You might predict it'd be a laugh riot (until yer PS3 warmed up) but in truth it's alright stuff as a bowl of salsa escapes and threatens us all with radioactive hot stuff. It's better than you think.

Before "The Blob" there was X-The Unknown, a creepy, scary film by Hammer, the makers of the Quatermass series. Radioactive mud rises to the surface to terrorize soldiers and residents of a scottish village. As it is radioactive several victims succomb to burns and worse while it is on the prowl for radiation that makes it grow even larger. While the special effects are dated it can still send a chill through you with the melting scenes and the longest scream I ever heard in a sci-fi film. Decent script and excellent acting by american actor Dean Jagger and british actors Leo Mckern and Edward Chapman help to make this film well worth the rental. 3 Stars 1-16-13

This not entirely satisfying Hammer film is pretty much solidifies the reason as to why you didn't see them making too many sci-fi movies. Dean Jagger plays an American scientist in Scotland, who with the army at his disposal must stop the radioactive version of The Blob. The story is nothing innovative or even particularly exciting but even Hammer's lesser efforts have some great murders, an awesome-looking monster and a great finale. And if you're lucky, some spectacular photography. Fortunately, X the Unknown has all of these things. It's just too bad there are those story parts inbetween.

Alot of noise and static..and a performance by Dean Jagger as though hes' taking a stroll in the park..uninspired, not scary or frightening, just a blob of radioactive energy slime creating havoc..the science behind it is as hard to grasp as the entertainment value (or lack thereof) this movie offers...