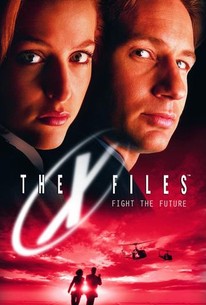 Critics Consensus: Results may vary for newcomers, but fans of the series will enjoy its big-screen transition.

Critics Consensus: Results may vary for newcomers, but fans of the series will enjoy its big-screen transition.

Critic Consensus: Results may vary for newcomers, but fans of the series will enjoy its big-screen transition.

The X-Files - Fight the Future Photos

This 60-million-dollar science fiction suspense drama (marketed with an additional 25 million dollars), was adapted from the popular TV series The X-Files -- arriving in theaters while the Emmy-winning series was still being aired, continuing plot threads familiar to many of the series' 25 million viewers, and featuring several familiar recurring characters introduced during the previous five TV seasons. In 15,000 B.C., a strange creature attacks a caveman. Cut to present day, when a boy at the same North Texas spot falls into a pit and is contaminated by a black substance. When a bomb threatens the Dallas Federal Building, special FBI agents Fox Mulder (David Duchovny) and Dana Scully (Gillian Anderson) locate the device but are unable to prevent the explosion. The agency blames Mulder and Scully for the disaster, subjecting them to lengthy interrogations while trying to sever their partnership. In a bar, conspiracy theorist Kurtzweil (Martin Landau), a friend of Mulder's father, tells Mulder about the group behind the explosion, the cover-up of the boy's death, the bodies of four infected rescue workers removed from the Federal Building, the secret government, and the forthcoming plague. Mulder and Scully set out to find answers, and their investigation becomes a foray into the fantastic. ~ Bhob Stewart, Rovi

William B. Davis
as Cigarette-Smoking Man

Gregory B. Ballora
as Creature 2

Amine Zary
as Tunisian
View All

News & Interviews for The X-Files - Fight the Future

View All The X-Files - Fight the Future News

Critic Reviews for The X-Files - Fight the Future

I came close to getting very excited on several different occasions, and that's saying something when you consider that I thought the experience would be more like participating in a card game that's beyond my comprehension.

I predict you'll be pleasantly surprised, and may even find yourself in front of the TV on Sunday nights with the rest of us X-Files groupies.

The X-Files movie is really just a two-hour teaser for the series's sixth season. And little else.

Dark, funny, paranoid, arbitrary, humming with tamped-down eroticism and in love with all things weird: That's the good news.

As it is, pic serves up set-pieces and a measure of scope that are beyond TV size but remain rather underwhelming by feature standards.

Whilst elements were designed to bring on new fans, the experience is better for fans who have knowledge of the show.

It's the perfect summation of the first five seasons and it is WONDERFUL. It captures everything that makes the show great: intrigue, suspicion, action, partnership, loyalty, friendship and-yes!-love.

Chris Carter had the daunting task of pleasing fans of the show, while at the same time not alienating those new to it. It's a balancing act that he mostly achieved, but in the end it's probably best enjoyed by those who are already fans.

I want to believe this latest X-Files film was created for a reason other than financial reward, but I find it difficult to guess at what that reason might have been.

...lives up to the standard set by its small-screen predecessor's superb early seasons.

Audience Reviews for The X-Files - Fight the Future

A young boy in Texas is infected by a mysterious contageon and when it seems as if an entire office building is destroyed by a phoney terrorist attack just to cover it up, Mulder and Scully investigate. I was a big fan of the X-Files in the beginning but it became increasingly obvious that the alien conspiracy storyline was just being made up as they went, leading to one unsatisfying plot development after another that never contained any real answers. At the time, everyone hoped that Fight The Future would finally explain all but when this turned out to be yet another load of half answered questions it meant exasperation and disillusionment all round. On revisiting it, I found it a lot easier to be objective and I must admit that knowing what happens afterward, the film actually makes a lot more sense. It opens very strongly with the usual banter from the extremely likeable leads and attractive visuals with good use of the cinematic media giving it the epic sweep it needed to make the translation to the big screen. Unfortunately the plot follows the typical alien conspiracy formula with the usual mysterious source coming to Mulder in a back alleys and Scully getting kidnapped and experimented on YET AGAIN, but it does have some decent set pieces and has stood up quite well on the whole. But because of the overly familiar plot devices it does just feel like a two-parter and as such will be completely incomprehensible to the casual viewer. Recommended for fans, but others shouldn't really bother to try wrap their heads around it.

After The success of the show, it was obvious that a film would conclude it's terrific run. X Files: Fight The Future is a terrific Sci Fi Horror film with a fairly good story and decent enough acting to keep one entertained. Moulder and Scully are back one the trail of the paranormal, and this film succeeds in providing the viewer with head scratching questions. This is an enjoyable film that will appeal to Sci Fi fans as well as Horror fans. The story steadily builds up to a tense climax and pays off, and this film ends on a high note. The film will appeal to diehard fans of the series. The film has a terrific atmosphere of mystery and doubt. All the elements that made the TV show great are here and the finished product is very well done. The reason the film works so well is that they were able to keep all the key elements that made the show entertaining and great while expanding the plot to be more complex, intriguing, mysterious and horrifying. This film is a fairly good attempt for the show to transcend to the big screen. There are enough thrills to keep diehard fans interested. And people who haven't watched the show will probably enjoy the film as well. A film that full of mystery, thrills, horror and good old crime drama, this is one film that can appeal to a broad audience, and not just Horror fans or Sci Fi fans. A terrific film that has been been very well crafted, entertaining and well written, this is a film that even though flawed will definitely entertain you if you're in the mood for something different. This film is a change of pace from many of the Sci Fi / Horror films that we have seen.

Released in between two seasons, Fight the Future was a sad cop-out that only true fans could enjoy (I am one of them).

I was definitely in the minority when I saw this film. I had never watched the TV show. But I loved the movie, and it made me wish I had watched the show.

The X-Files - Fight the Future Quotes