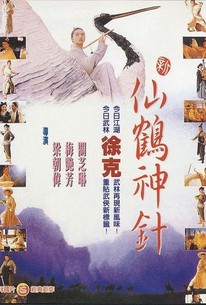 The film opens with kung fu master Ma Kwun-mo (Tony Leung) being saved by the stunning Pak Wan-fai (Anita Mui) and her pet crane Yuen Yuk. In gratitude, Ma promises not to reveal Pak's identity to anyone. Later, at a kung fu meeting attended by Ma, the evil So Pang-hoi (Lawrence Ng) orders a fleet of poisonous bats to kill every other student at martial arts schools. His plans are thwarted by Yuen Yuk. While hurriedly searching for a remedy for the bats toxins to treat stricken pupils, Pak encounters the embittered Butterfly Lam (Rosamund Kwan), and soon the two are embroiled in a vicious battle using lethal sound waves. Meanwhile, So continues on his quest to take over the world. ~ Jonathan Crow, Rovi

Lawrence Ng
as So Pang-hoi

There are no critic reviews yet for Xin xian he shen zhen (The Magic Crane). Keep checking Rotten Tomatoes for updates!

There are no featured reviews for Xin xian he shen zhen (The Magic Crane) at this time.