The Year My Voice Broke1987 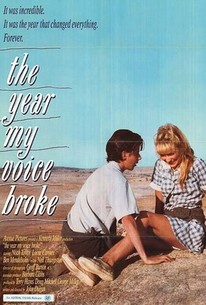 The Year My Voice Broke Photos

The life of a teen in an isolated small town is the subject of Australian writer/director John Duigan's film, set in 1962 in New South Wales. Duigan's coming-of-age story has many familiar elements -- Danny Embling (Noah Taylor) discovers his sexual attraction to a childhood playmate (Leone Carmen as Freya), he undergoes the taunts of bullies at his school, rages against the narrow-minded views of his parents and many of the townspeople, and comes under the influence of a sympathetic adult (Bruce Spence as Jonah, a would-be writer who lives in an abandoned railroad car). The twist is that Danny's rival for Freya's affections, Trevor (Ben Mendelsohn), is a Jewish jock who becomes Danny's friend by standing up to the bullies and treating Freya with more respect than the other boys do. Duigan, who had been making films in Australia since the mid-'70s, broke through to U.S. audiences with this film and its sequel, Flirting, in which Noah Taylor reprises the lead role.

Critic Reviews for The Year My Voice Broke

The characters are memorable ones, and beautifully played by the three young newcomers, with Noah Taylor especially effective as the lovesick Danny.

A film to restore one's faith in films about the transition from adolescence to adulthood.

It is so pleasant and unpretentious that we can almost forget the total lack of surprise in this deftly acted Australian film.

This isn't an adolescent wish-fulfillment fantasy, so the impossible never happens, and it's a credit to the movie that it doesn't.

Although most of this is rather familiar stuff...the treatment is sufficiently sincere and nuanced to give it a touch of poignancy.

The ending carries a tidal surge of regret for youthful emotional loss that will no doubt be universal.

This funny, touching, truthful gem of a film is one of the ongoing pleasures of Australian cinema, and is as fresh and compelling on its 21st anniversary as it was on its acclaimed release

Though it covers familiar territory, this well-acted, skillfully photographed film is a gentle examination of the rites of passage.

Wonderful, perceptive, and original Australian film about the magic and anguish of adolescence.

Duigan's gift for characterization and feel for period give the film its haunting and evocative mood, and hint at something altogether darker than the average teen flick.

It's solid, involving and uncomfortably familiar -- another good, but not great, coming-of-age drama.

Audience Reviews for The Year My Voice Broke

A worthwhile trip to early Sixties, small town, Australia where burgeoning youth learns that even the most innocent of lives here on Planet Earth is fraught with difficulty. While American media seduced via music and movies about the possibility of a better life possibly somewhere else, the local populace of this rural outpost have to live with the apparent drabness of their own situation. The natural performances of the leads and the writer/director's sure knowledge of his source material quietly deliver this laid back home cooked meal designed to satisfy. A great suggestion by a dear friend.

I love coming-of-age and both Noah Taylor and Loene Carmen's longing for people they can never truly have is something we can all identify with and feel their pain.

The Year My Voice Broke Quotes