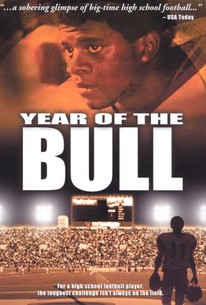 Year of the Bull Photos

A rising high school football star makes his bid to escape the turmoil of the inner-city and into a Division 1 collegiate program in this documentary highlighting the ongoing debate between athletic prowess and academic advancement. Taurean Charles is a star player for the Miami Northwestern Bulls, but the blue-chip prospect finds his athletic future drawn into question when standardized tests and internal conflict threaten to derail his career before he has the chance to truly realize his potential. His family life in shambles and his focus on the future in constant jeopardy due to the conflicting agendas of those who surround him, Charles will have to work as hard off the field as he does on it if he has any hope of escaping the city and making a name for himself on the gridiron.

Critic Reviews for Year of the Bull

There are no critic reviews yet for Year of the Bull. Keep checking Rotten Tomatoes for updates!

Audience Reviews for Year of the Bull

There are no featured audience reviews yet. Click the link below to see what others say about Year of the Bull!

Year of the Bull Quotes