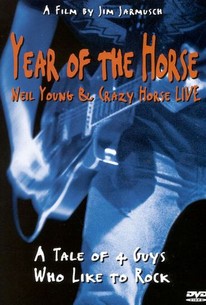 Critics Consensus: Year of the Horse might be worth a watch for hardcore fans of Neil Young or Jim Jarmusch, but it will likely test the patience of most other viewers.

Critics Consensus: Year of the Horse might be worth a watch for hardcore fans of Neil Young or Jim Jarmusch, but it will likely test the patience of most other viewers.

Critic Consensus: Year of the Horse might be worth a watch for hardcore fans of Neil Young or Jim Jarmusch, but it will likely test the patience of most other viewers.

Year of the Horse Photos

Independent film hero Jim Jarmusch followed Neil Young & Crazy Horse during their 1996 world tour and captured it on handheld Super-8. Spliced with archival footage shot by Young and with current interviews from all band members and Young's father, the result is not so much an overview of the band's career as an homage to the power of the band's consistent and timeless work as a four-piece. With three other Neil Young concert films available on home video (Rust Never Sleeps, Weld, Neil Young Unplugged) Year of the Horse seems a bit redundant, but was obviously a labor of love for Jarmusch. Though the current concert footage seems to drag on (Crazy Horse's propensity for endless jamming isn't exciting every night), the old backstage interviews and a classic clip of live Young from 1976 is worth the viewing.

Critic Reviews for Year of the Horse

Jarmusch gets nothing out of his interview except the band members and manager repeatedly telling us how long and how well the group works together.

A timeless record of a timeless band.

Both a quirky little movie and a monument to one of rock 'n' roll's greatest noisemakers.

Plays like This Is Spinal Tap made from anti-matter. Both films are about aging rockers, but Year of the Horse removes the humor and energy.

This is quite possibly the worst documentary I have ever had the displeasure of watching on the big screen.

This is an intimate, lyrical yet incendiary film, and it will please fans of both Young and Jarmusch.

If you don't like the music, forget it. But, if you're like me, a Neil Young fan, this is great inside stuff.

While a little Jarmusch is a good thing, a lot can be a bit much to take. At least when he's in this mood.

The boys don't have much to say but it's oddly fascinating watching them try.

Too often comes across as so much fiddling with graphics and visual formats.

A far cry from some of the better 'rockumentaries' out there.

Audience Reviews for Year of the Horse

There are no featured audience reviews yet. Click the link below to see what others say about Year of the Horse!

Year of the Horse Quotes