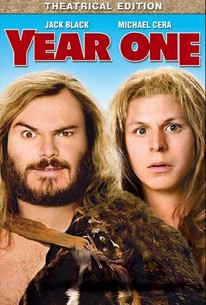 Critics Consensus: Year One is a poorly executed, slapdash comedy in which the talent both in front of and behind the camera never seem to be on the same page.

Critics Consensus: Year One is a poorly executed, slapdash comedy in which the talent both in front of and behind the camera never seem to be on the same page.

Critic Consensus: Year One is a poorly executed, slapdash comedy in which the talent both in front of and behind the camera never seem to be on the same page.

Jack Black and Michael Cera headline Harold Ramis' Biblical comedy about a pair of misfit hunter-gatherers who embark on a wild journey through the ancient world after being banished from their primitive village. Zed (Black) and Oh (Cera) may lack in the skills that their chieftain is looking for, but they have plans to make it big. Zed has a gut feeling that God has "chosen" him, and so he leads his buddy on a trip through the unknown countryside in search of bigger and better things, bumping into several weird characters along the way -- like a feuding pair of brothers named Cain and Abel (David Cross and Paul Rudd). Unfortunately, their quest for greatness hits a few snags, like being sold into slavery, and later becoming the object of interest to a very amorous, very hairy high priest (Oliver Platt) in the opulent city of Sodom. ~ Jason Buchanan, Rovi

Kyle Gass
as Zaftig The Eunuch

Matt Besser
as Guy in Crowd

Paul Rudd
as Abel
View All

Critic Reviews for Year One

All in all, this is a sloppy, unoriginal, brain-dead mess that can't even be bothered to get itself out of trouble.

What's even more depressing than the never-ending stream of sub-sixth-grade toilet humor is the sad fact that Year One is helmed and co-produced by two of the best laughmeisters in the business.

Creatively it's a giant step backwards, with Jack Black and Michael Cera playing to the kids as inept hunter-gatherers who stumble across various Old Testament characters.

The film is lumpy and self-conscious, the dialogue not very witty.

'Year One' wants to be seen as a freeform, knockabout trawl through Biblical history, perfect for an undemanding Saturday night. There are only two problems: it's kind of dull and just isn't funny.

All hail Michael Cera, worker of unprecedented movie miracles! The 21-year-old Canadian comic takes a weak concept and some weaker material and, wherever possible, adds some much needed flashes of comedic genius.

It may go slightly beyond the blueprints for a formulaic parody movie, but it has all the same symptoms.

Year One buckles at the first bad gag and it's downhill from there.

Unfortunately, all the talent doesn't translate on the screen. Sure, there are a few mildly amusing moments (most coming courtesy of Cera), but for the most part Year One was one big dud.

Considering Year One is likely to flop, there's little point in giving it the benefit of controversy by protesting too much.

In the beginning there was light, which was closely followed by the fart joke.

Audience Reviews for Year One

Humor must be highly subjective. I didn't see this when it came out because it looked like it was "too high school" but I laughed myself sick watching it. I was choking. Never've been a fan of Black or Cera (though both do okay here) so I credit writer/director Ramis for making me laugh as haven't in 20 years ... thank you, Harold.

It seems that Harold Ramis didn't know that putting Cera and Black is a big mistake, Jack way of expressing comedy is way to different to how Cera shows which really ruined it for me, critics and the general public who watched it.