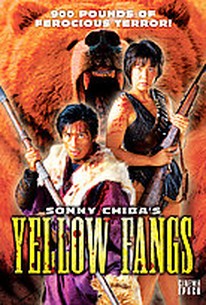 Screen legend Sonny Chiba makes his feature directorial debut with this tale of a young bear hunter who vows to end the horrific reign of the ten foot tall, 900 pound bear that's been terrorizing a small mountain village. Based on actual events that unfolded in Hokkaido, Japan in 1915, Yellow Fangs opens to find the frightened villagers cowering in fear at the monstrous bear that has made their quiet village his personal buffet. Christened "Red Spot" due to the bloodstains that dot his massive hide, the bear sets about murdering the men of the town and dragging the women into the forest to devour by moonlight. Meanwhile, young bear hunter Eiji welcomes the beautiful Yuki to stay with him after she is kicked out of her family home. That same night, Red Spot attacks Yuki's home, viciously killing her father and brothers, and making a quick meal of her mother. Upon learning of the dreadful attack, Eiji organizes a team of hunters to venture into the woods and slay the beast. But Yuki is forbidden to join them because she is a woman. Determined to seek revenge against Red Spot, the fearless girl disguises herself as a boy and arms herself for the ultimate battle of woman versus beast. ~ Jason Buchanan, Rovi

There are no critic reviews yet for Yellow Fangs. Keep checking Rotten Tomatoes for updates!

There are no featured reviews for Yellow Fangs at this time.