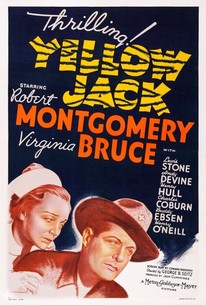 The Sidney Howard/Paul de Kruf Broadway play Yellow Jack was transferred to the screen by MGM in 1938. The film is set at the turn of the century, when yellow fever was the Number One killer in Latin America. Army doctors Lewis Stone, Charles Coburn and Stanley Ridges gather in Cuba to attempt to find the cause and cure of the dreaded disease. Five US soldiers--Robert Montgomery, Buddy Ebsen, Alan Curtis, Sam Levene and William Henry--volunteer to expose themselves to yellow fever as a means to test the experimental vaccines. In a very well handled close-up setpiece, the audience discovers long before the medical staff that the humble mosquito is the disease carrier. The "Let me be the first to die" brand of heroics is sometimes hard to take, but otherwise Yellow Jack is inspiring entertainment in the grand old Hollywood tradition. ~ Hal Erickson, Rovi

Douglas McPhail
as Joey
View All

As a whole... Yellow Jack is a fine worthwhile picture that just misses being a great one.

There are no featured reviews for Yellow Jack at this time.