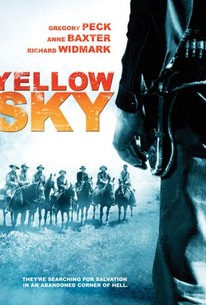 William Wellman's westerns always seemed a little claustrophobic, but in Yellow Sky the director's technique works to the film's advantage. Outlaw leader Gregory Peck takes refuge in a frontier ghost town. The only inhabitants are elderly James Barton and his pretty granddaughter Anne Baxter. Barton reveals that there's gold hereabouts, prompting a few of Peck's companions--especially Richard Widmark--to plot the old man's demise and claim the treasure for themselves. For his part, Peck is basically honorable, and offers to split fifty-fifty with Barton. Dissension, hostility and gunplay ensue, finally narrowing down to a standoff between Peck and Widmark. Yellow Sky was based on a novel by W.R. Burnett, who moved from westerns to gangster stories and back again with the greatest of ease. ~ Hal Erickson, Rovi

Harry Morgan
as Half Pint

Eula Guy
as Woman in Bank

Jay Silverheels
as Indian
View All

It has some good action and fine photography and ranks several notches above the western film standard.

For seventy-odd minutes, in this scorcher from Twentieth Century-Fox, the guns blaze, fists fly and passions tangle in the best realistic Western style.

Takes some unusual detours that allow it to stand out from the pack.

This superior western is marked by an outstanding performance by Gregory Peck.

unheralded wellman western with gregory peck leading a band of outlaws across death valley to hole up in the ghost town of yellow sky. an excellent variation on the tempest/'forbidden planet' theme with anne baxter as a feisty gunslinger and richard widmark a troublemaking 'dude'. the last 5 minutes kinda sells it out but first rate right up until then

Excellent Western where Gregory Peck plays an Outlaw with a gang who is chased across the salt flats into what appears to be a ghost town where near dying of thirst they come across the beautiful Anne Baxter who plays the granddaughter of a miner. The gang is going to steal all the old mans gold until Peck goes soft for the young lady. All in All a great western and great acting by Peck, 4 1/2 Stars