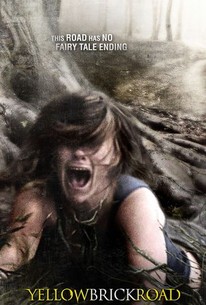 In the Fall of 1940, the entire population of Friar, NH abandoned their homes and walked up an ancient trail, never to be seen alive again. Their fates have remained a mystery for over 70 years, until a team of researchers discover the trailhead and attempt to track the path the doomedcitizens of Friar took. Yellowbrickroad is a return to the slow burn, character driven horror thrillers of the 1970s. -- (C) Official Site

Lee Wilkof
as The Usher
View All

Despite us tagging along the trail for days, we feel closer to the landscape than to the characters.

Meticulously paced, methodical in the way it delivers its information, this film isn't so much scary as it is deeply disconcerting, everything moving towards a somewhat inevitable conclusion that had me nonetheless squirming.

"Yellowbrickroad" is without personality. It's competently made, but the cast and direction are just bland.

As cheap horror fare goes, YellowBrickRoad emphasizes imagination over gore. This is good, because the gore here is somewhat laughable, while the imagination is just creepy enough to be effective.

The film is caught in the fatal demographic desert between the Scream and Baghead crowds -- neither funny nor quirky enough to sustain interest during its long march.

Co-writer/directors Jesse Holland and Andy Mitton miss as many opportunities as they develop here, but they maintain the mystery and ratchet up suspense like seasoned pros.

A disturbing and unsettling bit of word to the wise that sometimes the unsolvable should remain unsolved...

Clever and packed with smart characters.

It's rare these days to see a refreshing approach to backwoods horror, but YellowBrickRoad once again proves that there are still original and terrifying stories lurking in nature.

In the end, YellowBrickRoad is just another pathway for people who go into the woods, go crazy, and get killed.

YellowBrickRoad not only offers a mystery with no solution (which isn't such a terrible thing by itself), but also a story with no clear sense of purpose.

The only thing disturbing about this movie is that someone actually agreed to make it. I understand that it's an independent film, written, directed, and starring first timers, but anyone who read this script had to have known it just wouldn't work! Don't get me wrong, the story they had was extremely solid, and they could have taken it in a million different directions, any other direction than the one they took. The story starts 70 years ago, when an entire town randomly decides to follow a path into the woods and are never heard from again. The FBI investigated, covered up whatever they found, and kept the whole area off limits, until a random group of people decide to investigate for themselves and write a book about their experiences. First of all, this group of people have no connection to the town, people, or even each other, so why do this? Second, for 70 years the FBI has kept the area off limits to everyone, so what makes this group so special? These idiots march into the woods and the only thing they find is music playing, music that gets progressively louder until it drives them insane. The music is from the Wizard of Oz, but the producers were too cheap to buy the rights to the music from the Wizard of Oz, so it's very similar melodies with different words that nearly drove me to insanity. These idiots romp through the woods makes the Blair Witch Project look like an Oscar worthy film by comparison. It's a lot of talking, and crying, and yelling, that leads to an ending that is by far one of the dumbest fucking things I have ever seen. The ending is the strangest part of all, in that it builds up and plays like it's some huge twist, which maybe it would have been had it made any sense at all. The acting was terrible, the direction was all over the place, and the film destroys the story worst than Paula Deen destroyed her career. This is one film you should absolutely avoid!

I liked this one. It just kept me wondering throughout the whole thing. A very good psychological horror flick.

This movie has a great premise; in the thirties the residents of a small town disappeared after wandering on a trail. Now a documentary team discover the location of the trail and set off themselves to investigate, becoming more and more unhinged as they go. This promising idea is ruined by amateurish acting and directing and awful effects. A rare case of a movie that could be improved with a big budget remake.

Cast:Cassidy Freeman, Laura Heisler, Lee Wilkof, Anessa Ramsey, Clark Freeman, Alex Draper, Tara Giordano, Michael Laurino, Sam Elmore Director:Jesse Holland, Andy Mitton Summary: In this indie horror offering from writer-directors Jesse Holland and Andy Mitton, a small team of explorers heads into the New Hampshire wilderness to investigate an unexplained disappearance that happened some 70 years earlier. No one knows why the residents of Friar made a collective decision to leave their homes -- without their money, their clothes or a word about where they'd gone. But the truth could be stranger than fiction. My Thoughts: "Long, boring, and absolutely no thrills or scares. At least not for me. I had a hard time keeping my fingers from pressing the stop button. An antagonizing film that just leaves you frustrated for renting it in the first place. But that's what I get for being intrigued by a title and cover of a DVD. The story may have been better if directed and acted by different people. But it wasn't and that's why I would rather watch an episode of Barney then to have to sit through this film again."