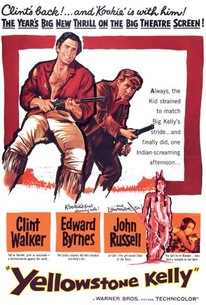 Set in 1876, this western focuses on Native Americans and the U.S. Cavalry as they fight it out, with the twist that it's the Cavalry men who are the bad guys. "Yellowstone Kelly" (Clint Walker of Cheyenne TV fame) is a fur trapper and friend of the Sioux nation. After the Calvary is beaten by the Sioux, Kelly is caught up in the escapade of an Arapahoe woman, Wahleeah (Andra Martin) who does not want to marry the Sioux chief. It takes a few tragic deaths to settle that issue, to almost everyone's satisfaction. While Native Americans are more sympathetically portrayed in this story adapted from a book by Clay Fisher, it is still worth noting that in 1959, Hollywood did not hire Native American actors to play the Sioux or Arapahoe parts.

There are no featured audience reviews yet. Click the link below to see what others say about Yellowstone Kelly!