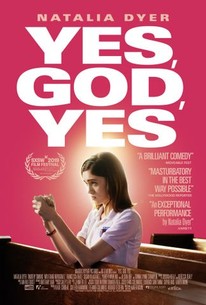 Growing up in the Midwest in the early 00s, sixteen-year-old Alice has always been a good Catholic. But when an innocent AOL chat turns racy, she discovers masturbation and is overwhelmed with guilt. Seeking redemption, she attends a mysterious religious retreat to try and suppress her urges, but it isn't easy, especially after a cute upperclassman starts flirting with her. Alice's sense of shame is spiraling when she uncovers a shocking truth about the retreat's most devout. Desperate and confused, she flees the retreat and meets an unlikely ally who offers an alternative view of what it means to be a good person. For the first time, Alice realizes she can decide for herself what to believe and finally gets the release she needs.

Best-Reviewed Movies by Genre 2020
The Indie Fresh List: The Shadow of Violence, Summerland, The Fight, and Yes, God, Yes

Flatly filmed, drably lit, and sluggishly paced, "Yes, God, Yes" takes a cheeky premise and slowly lets the air out of it.

I was really impressed with this. A small, slight film that gets absolutely to the heart of strangeness...

The film serves as an ode to the sexually naive - pioneers in their own pleasure.

An original, charming and honest story on adolescence and religion.

Yes, God, Yes is a gentle, comforting addition to the coming-of-age genre that gives agency back to those who usually struggle without it.

The onanism-centric story might, in lesser hands, invite titters and embarrassment, but 'Yes, God, Yes' is mercifully sweet and downright sensitive.

The film strays into didactic and predictable territory towards the end, and what should feel gratifying falls flat. Still, Yes, God, Yes is smart and honest, avoiding Hollywood tropes and favouring veracious character development.

Chris Edwards
One Room With A View

Karen Maine gives a unique twist on a teen sex comedy while also exposing the fact that many authority figures don't practice what they preach. Consequently, Yes, God, Yes is a small film that winds up delivering outsized rewards.

There are no featured reviews for Yes, God, Yes at this time.