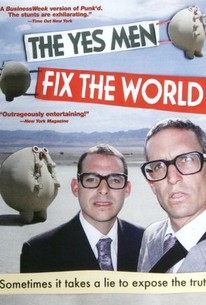 Critics Consensus: The Yes Men aim their barbs at the capitalist fat-cats with gutsy and hilarious performance pranks.

Critics Consensus: The Yes Men aim their barbs at the capitalist fat-cats with gutsy and hilarious performance pranks.

Critic Consensus: The Yes Men aim their barbs at the capitalist fat-cats with gutsy and hilarious performance pranks.

Andy Bichlbaum and Mike Bonanno are "The Yes Men" -- two guys who combine political activism, performance art, and the love of a good prank in the name of demanding that the private sector take responsibility for the damage it has done to the world and its people. Bichlbaum and Bonanno specialize in setting up realistic-looking mock websites that claim to represent famous and powerful multinational corporations, and when they're contacted to speak on behalf of the companies, they deliver absurd satirical presentations that sometimes fool their audiences into believing they've seen the real thing. The exploits of Bichlbaum and Bonanno were chronicled in the 2003 documentary The Yes Men, and their further adventures have spawned a second film, The Yes Men Fix the World, which follows the radical pranksters as they claim responsibility for a major environmental disaster in Bhopal on European television, demonstrate a new corporate rescue orb, "defend" corporate interests in the wake of Hurricane Katrina, and publish a mock edition of The New York Times that declares the end of the war in Iraq. The Yes Men Fix the World received its world premiere at the 2009 Sundance Film Festival. ~ Mark Deming, Rovi

Critic Reviews for The Yes Men Fix the World

The Yes Men's bravery and unflagging sense of optimistically doomed humor -- which comes across as a quixotic version of Monty Python by way of Upton Sinclair -- is to be applauded and, wherever possible, acted upon.

Unfortunately, they risk seeming glib during this doc, which brandishes a cheekier, more self-congratulatory tone than did The Yes Men, its 2003 predecessor.

An entertaining swipe at corporate irresponsibility.

Beyond question, the results are overstated, outrageous and wildly, scatologically juvenile. But they're also a hoot to watch.

Bichlbaum and Bonanno don't just try to make the world a better place. They treat it as if it already were.

They are highly entertaining and I am sympathetic to most of their grievances.

The Yes Men Change the World is an entertaining, amusing and deeply worthwhile documentary.

Yes Men Fix the World feels like little more than a vanity piece, and a shoddily developed one at that.

A noble experiment, but one that, ultimately, seems to backfire more than it succeeds.

I chuckled, I giggled, I snickered, I hooted, I cackled, I chortled, I guffawed and I roared.

The duo also seems too focused on justifying their own controversial actions and harping on the humor element in the sequel.

...the film remains perfectly watchable for the majority of its appreciatively brief running time.

Audience Reviews for The Yes Men Fix the World

The merry pranksters "The Yes Men" are at it again - but this time their documentary is much cleaner and better produced than their 2003 original effort. What can you say about these guys except hurrah! They take the establishment and point out the foibles so aptly - they dupe the BBC into believing that a Yes Man is a spokesperson for Dow Chemical (and therefore announcing on a BBC news talk show that Dow will be paying full restitution to the Indian community wrecked by the chemical spill of United Carbide 20 years earlier - Dow purchased UC 3 years before the film). They further spoof Dow by becoming Dow's featured speakers at a corporate conference - claiming that they have perfected an algorhythm for determining acceptable human loss vs. corporate gains on any given project. The list goes on, with them aiming at the post Katrina carpetbaggers amongst other things, but it is simply amazing how they manage to not only get away with pulling the wool over the eyes of politicos and middle management types, but so succinctly point out the enormous greed that has such an effect over just about everything. It is almost surreal, like watching an enormous spoof or black comedy... until you remember that this is the real deal - this stuff is actually happening and the Yes Men are out there trying to raise the common consciousness by lampooning the way big business thinks and acts. As they say in the film - "we started out trying to fix the world, but our efforts seemed to have the opposite effect; so now we're aiming at simply drawing attention to the enormous farce that constitutes the way the world is run".

These guys always deliver cutting edge political advocacy. Their little bits of imaginary "down time" distract from the overall film (and not in the requisite relief way I'm sure they were aiming for. Still there are plenty of gut-busting and giddying pranks, hard-hitting explications of their actions and exposes of those whom they are targeting, which are all solid and mildly to wildly brilliant.

Subversive and cunning, the Yes Men succeed in making commitments on behalf of corporations while providing proof that companies often do not "do the right thing" and are lacking a soul. Daring and challenging. Why have I not heard of these guys before?

Moore-lite , this worthy duo hoax their way into the public eye, exposing truths about companies which are hardly revelatory but none the less worth reinforcing.