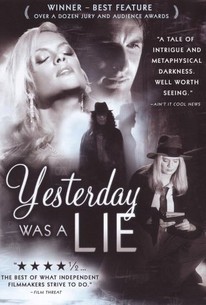 Yesterday Was a Lie Photos

Writer/director James Kerwin infuses Raymond Chandler-influenced noir with a metaphysical twist by tracing the story of a female detective who's tough enough to take on even Philip Marlowe in this monochromatic mystery designed to challenge the viewer's very perception of reality. Hoyle (Kipleigh Brown) is a hard-drinking detective whose taste for bourbon betrays her razor-sharp sleuthing skills. Set out on the trail of a reclusive genius (John Newton), however, Hoyle soon finds her life becoming increasingly fragmented and surreal. The only people that Hoyle can trust as she begins to uncover a series of mind-bending cosmological secrets are her loyal partner (Mik Scriba) and a scintillating lounge singer (Chase Masterson). But wherever Hoyle goes, she is shadowed by a mysterious figure (Peter Mayhew) whom she is soon destined to meet, and who may just possess the power to bend reality. In a world of black and white, Hoyle is about to take a bizarre journey into the divine gradients of grey invisible to the naked eye.

Peter Mayhew
as The Dead Man

Megan Henning
as Student
View All

Critic Reviews for Yesterday Was a Lie

The sci-fi noir is a movie of intelligence, imagination and mostly beautiful execution, which is why Yesterday Was a Lie is not quite a success, but far more than a respectable failure.

It's a mixture of some very clever, but unguided ideas.

This film is highly recommended for those who appreciate a good, dark portrayal of the human psyche. Be warned: it won't hold your hand.

Yesterday Was a Lie deals with some heady themes, and Brown strikes some nice notes on her character's frustrated journey, but the film is finally too disjointed and incomprehensible to be enjoyed as much else besides an exercise in style.

There is brilliance here that demonstrates the best of what independent filmmakers strive to do.

Audience Reviews for Yesterday Was a Lie

If you're a total sucker for noir with a sci-fi twist you'll find just enough interesting about this to sit through most of it. Mostly though it's reminiscent of cut-scenes you would find in late 90's PC adventure games; bad acting pasted on gorgeous landscapes. Except the problem here is that you have to sit through an hour and a half of it...all the while having to remind yourself that it's only rated PG and there aren't going to be any lesbian makeout scenes despite the appearance to the contrary, Trench coats and fedoras for everyone! And I mean literally everyone.

Yesterday Was a Lie Quotes