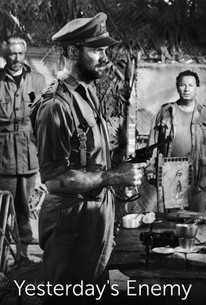 The scene is Burma during World War II. A small British brigade led by Stanley Baker comes upon a Burmese village controlled by the Japanese. The brigade wipes out the enemy, whereupon Baker discovers that the late Japanese commandant has a coded map secreted on his person. When a Burmese prisoner who can decode the map refuses to talk, Baker orders that two peaceful villagers be executed. Baker's actions seem cruel and extreme until it becomes apparent that the enemy is twice as ruthless as he. Based on a TV play by Peter R. Newman, Yesterday's Enemy is a brutal but insightful look at the blurred line between good and evil in wartime conditions. ~ Hal Erickson, Rovi

Barry Steele
as Brown
View All

There are no featured reviews for Yesterday's Enemy at this time.