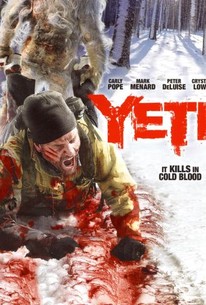 A college football team comes face to face with a Himalayan nightmare after their plane crashes on a remote mountain during a powerful blizzard. They thought that surviving the elements would be their greatest challenge, but when the Yeti emerges to consume them whole, these stranded jocks realize that sub-zero temperatures are the least of their concerns. As the dreaded snow beast moves in for the kill, the survivors attempt to outsmart him or die trying.

Critic Reviews for Yeti: Curse of the Snow Demon

There are no critic reviews yet for Yeti: Curse of the Snow Demon. Keep checking Rotten Tomatoes for updates!

Audience Reviews for Yeti: Curse of the Snow Demon

What funniest about this film is that they try to call Vancouver, the Himalayas. Very lame, very silly. Everyone involved should be thoroughly ashamed of themselves.

One day someone is going to create a serious yeti/sasquatch film. Until then I can cope with these cheap B movies with excellent levels of hilarity. The yeti changes from dodgy costume to dodgy CGI. They only use CGI for the running and last act Superman jumping scenes. The best moment was a conversation where "shoot" and "face" were used no less than 3 times. Unfortunately, the film is bogged down by a bunch of idealistic cunt characters that writers seem to think we will like and applaud. I wanted to stab that stupid "don't eat the dead people to survive" bitch so much. Her justification of "if we eat these bodies we're no better than it" was hackneyed and irritating, as was her complete contempt for human lives as she dooms the rest of the party to certain death. The film would also be quite offensive to those that have had to eat human flesh to survive, if it weren't for it's tacky charm.