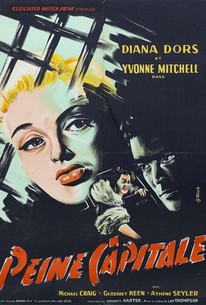 Yield to the Night Photos

Mary Hilton (Diana Dors) is a young salesgirl in the cosmetics department of a major London store, who chances to meet -- and fall hopelessly in love with -- Jim Lancaster (Michael Craig), a young would-be professional musician. She is attracted to him sufficiently to leave her own, neglectful husband (Harry Locke). But Jim's interest in her, although also sincere, is deflected by his attraction to Lucy Carpenter (Mercia Shaw), a much wealthier and older woman, who seems to be able to offer him the security that he's always lacked. That's difficult enough for Mary to take, but when Jim's relationship with Lucy takes a tragic turn, she snaps -- her love for Jim is transformed into a murderous hatred for her rival, resulting in murder, and a death sentence. Mary's story is told entirely in flashbacks, as she awaits her final sentencing or possible reprieve, and attempts to tie up the loose ends in her life involving her mother, brother, and husband.

Marianne Stone
as Richardson
View All

Critic Reviews for Yield to the Night

There is a terrible power in its descent of darkness.

A stunning film, its oppressive sadness feeling like a physical weight by the time we reach those final devastating yet inevitable scenes. Dors and Mitchell are superb.

As a plea against capital punishment, the producers' conception of their drama seems to lack passion, and this makes it difficult to assimilate the film's emotional climate.

The downbeat film's intention was to make an argument against capital punishment.

There are no featured reviews for Yield to the Night at this time.

Yield to the Night Quotes